Self-Aware Control Freak
Control Freak is a major antagonist from Teen Titan Go!. He is a fat and nerdy Internet reviewer who hates Teen Titans Go! and often breaks the fourth wall to insult the series and try to change it. Control Freak resembles the real-life haters of Teen Titans Go! as he brings up many of the common talking points, shared among the community of people who hate the show. He is also the main antagonist of Season 3.

He is voiced by Alexander Polinsky.

Control Freak made his debut and first major role in "Friendship", where the episode already began right in the middle of a fight between him and the Teen Titans, (sans Raven, who was distracted by watching Pretty Pretty Pegasus on the displays TVs in the TV store). Control Freak was getting sick of being beaten up by the Titans, so he took out his remote control and "changed the channel" on all of them, sending all the Titans into the TV show.

Control Freak told the Teen Titans that if they wanted to escape the TV show, they would have to go through the plot of the episode or else they would be trapped in the show forever.

Control Freak was not present throughout most of the episodes, though he did play a major role, as he was watching their TV show, the entire time. When the Teen Titans discovered the true meaning of friendship and resolved the plot of the episode, they were all automatically transported back to reality, where Control Freak was watching their show and getting all teary-eyed over the beautiful happy ending. When the Titans came back, Control Freak applauded them for their wonderful show and said that he actually really enjoyed what they did. The Teen Titans did not share his joy as they all went back to beating the snot out of him again, (except for Raven), who still continued to watch TV.

In "Nose Mouth", Robin had a dream, where he was surrounded by villains. One of them was Control Freak and Robin used his staff to beat him up.

The Teen Titans finally did a complete overhaul of their series and turned it into a high-class work of art. Control Freak was satisfied with their work and told them that he would not be rebooting them, much to their relief. Control Freak later added on that the Titans had already rebooted themselves, as their new show was nothing like what they used to be. The Teen Titans realized that he just tricked them into losing their personalities and fought back by acting low-brow and immature again. They turned themselves back to normal and Control Freak threatened to reboot them with his remote. So, the Teen Titans literally broke the fourth wall, so that the show would get destroyed and Control Freak couldn't reboot it. Somehow, this worked.

In "Classic Titans", Control Freak again tried to change Teen Titans Go! to fit his own liking. He used his remote to reboot them like he planned and failed to do in "Fourth Wall". He promised that his reboot would be more like the original series. However, instead of the show becoming more like Teen Titans, as one would expect, it became more reminiscent of the short-lived 1960's Filmation cartoon, which was technically the true original Teen Titans, as this was when they made their debut on television.

After tormenting the Teen Titans in their old-fashioned world for long enough, he started to realize that these cartoons weren't as good as he remembered them when he was a kid and he admitted to the reboot being lame. That being said, he undid the reboot and turned the show back to normal again.

In the five-part special mini-series, "Island Adventure", The Teen Titans were trapped on an island for an entire week. At the end of the special's final segment, "The Titans Show", it was revealed that Control Freak was behind all of it, as he trapped the Teen Titans on an artificial island, inside of a large, heavily-monitored simulator that broadcast their adventures on television for his own amusement, as well as the entertainment of a slew of their other villains, who all watched and enjoyed their misadventures.

When the Teen Titans figured this out, they broke out of the simulator and fought with Control Freak and all the other villains in a big epic battle, which was perfectly fitting for the finale. All of the villains were too powerful for the Titans to fight on their own, but once the Teen Titans brought back their allies that they made on the Island in the previous four episodes, they got the upper hand and finally reigned victorious but even though Control Freak knew he lost, he was happy because this is exactly the kind of finale he wanted for the special.

Just then, Control Freak noted that the Titans had just brought in a league of new fans, all of which were Batman villains. He opened another big door, revealing Bane, Killer Croc, Darkseid, The Joker, The Penguin, Poison Ivy, Harley Quinn, Two-Face, Mr. Freeze, Sinestro, The Riddler, Gorilla Grodd, Solomon Grundy, General Zod, and most surprisingly of all Slade Wilson. As soon as all of this happened, the episode and entire special immediately ended on a cliffhanger that was never resolved or referenced again in any future episodes.

In "The Chaff", Control Freak showed all of the deleted scenes from previous episodes to the world, hoping that it would get the show canceled. It did for a short time but after the Teen Titans sang a song about poop, the show got it's ratings back and got renewed, ending Control Freak's evil plan.

In "Toon Feud", Control Freak forced the Teen Titans to have a crossover with Scooby Doo and pitted them against each other in a Family Feud parody. 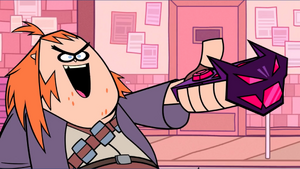 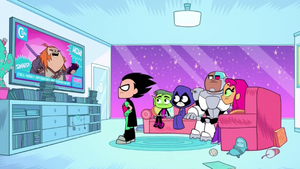 Control Freak hacking the TV of the Titans Tower. 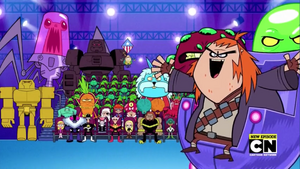 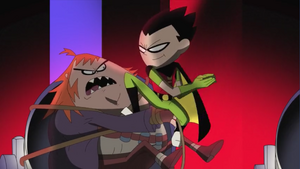 Control Freak's cameo in "Teen Titans Go! to the Movies".