Wipe out all of humanity and use them as cattle

Take over the Earth for the Xiliens and for himself.
Kill Godzilla and Ozaki
Rule and master the entire universe.

He is an acrimonious and malevolent alien warlord who seizes control of his species after murdering his former leader, and subsequently unleashes several kaiju onto the earth, revealing he wishes to cause humanity's annihilation and conquer the Earth in a violent, villainous, obstreperous, and destructive way by taking over the minds of Earth's monsters and ordering them to destroy the Earth's cities.

Later, when Godzilla was unleashed, X sent the monsters at his disposal to destroy him, only for him to defeat them one at a time. He later sent out Keizer Ghidorah and Gigan to kill him, only to fail once again, resulting in his death as the Xilien Mothership self-destructs.

He was portrayed by Kazuki Kitamura, who also played Nomura Shuhei in the 2014 film Killers.

Controller X first appears along with the rest of his species as seemingly benevolent saviors of humanity, rescuing them from attacking monsters and warning them of a massive meteor heading for the Earth. In actuality though, the meteor is a fake, and the monsters were sent by the Xiliens (the alien's given name to humanity) and that the Xiliens desire the Earth for themselves. But while the original leader sought a peaceful takeover, the sadistic and psychotic X had no patience for such things and murdered his leader the first chance he got.

Gleefully assuming leadership of the Xiliens, he vowed to exterminate the human race, which he repeatedly dismissed as being mere cattle, intending to use them for harvesting the mitochondria in their cells. Controlling the minds of the EDF's mutant soldiers, he also sent the kaiju back to earth where they resumed their destruction, also awakening the long-dormant Gigan.

However, Controller X's schemes hit a serious obstacle when Godzilla was awakened by humanity and unleashed on the other monsters. Tearing through the kaiju one by one, Godzilla eventually confronted Controller X's ship at around the same time the remaining members of the EDF did. Sending down Monster X and Gigan to deal with Godzilla, Controller X took the EDF humans captive and attempted to convert Shinichi Ozaki to his cause via mind control, only for Ozaki to be freed of the mind control by Otonoshi, who stabs Ozaki with a small sword previously given to them by the priestesses who control Mothra. Freed of Controller X's influence, Ozaki battles him while the other humans escape.

Unfortunately, Controller X proves to be too powerful and savagely beats Ozaki. But the tables turn when Ozaki taps into his fullest potential and mercilessly pummels Controller X into submission. Vowing that he won't die alone, Controller X activates the ship's self-destruct. Ozaki and the other humans manage to escape in time before it explodes, but Controller X perishes.

With X dead, only Monster X, the ultimate kaiju villain, remains to fight against Earth and transforms into his true form, Keizer Ghidorah, to destroy Godzilla, but is killed.

X is always seen as a young, black-haired Asian donning a pitch black trench coat over his full body matching undersuit and a pair of dark, thin sunglasses, usually accompanied by a cocky grin. X is simply a name that he chose for himself, as he felt that his real name would be too hard for the humans to pronounce. The letter "X" was chosen because he believed that it captured his personality, considering himself mysterious, fitting as he was a being from space.

X is known for his arrogance, megalomania, cartoonist sense of humor and immaturity, due to his young age and overwhelming power. He constantly underestimates his opponents (which leads to his demise) due to his xenophobic, contemptuous, and individualistic attitude and truly believes he and his race are infinitely better than all, possibly meaning he has a superiority complex. Despite his ignorance and borderline sociopathic tendencies, X is extremely powerful and armed with his strong telepathic connection and can physically and mentally manipulate anything with his mind alone. He can even brainwash mutants and turn them to his side. He possesses incredible strength, speed, agility, and impressive fighting skills, though his arrogance can cause him to leave himself open and make mistakes.

X appears to be mentally unstable, as he feels no remorse in killing his superior, the leader of the Xiliens, who is presumably his mentor. X is prone to untimely fits of hysterical laughter, like when one of his monsters is defeated, when Godzilla is released, or when he is beaten in hand to hand combat by Shinichi Ozaki. X is also victim to violent outbursts of rage. He becomes very angry when one of his monsters is defeated, or when he is outsmarted by one of the humans, often to the point of him jumping up and down and flailing his arms in anger.

However, these outbursts are unusually short, and he can snap between near-manic anger and a cool and emotionless state in the space of a few seconds.

X identifies himself as a "Keizer" one of the few beings with M-base in their DNA, making him one of the most powerful beings in the universe, should he tap into his potential. X also has a strong connection to Gigan, being able to re-awaken him after mummification for over one thousand years. He, like all M-base carriers, is an adept fighter, and carries leadership ability, as he becomes the undisputed leader of the Xilien race. 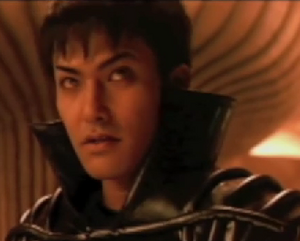 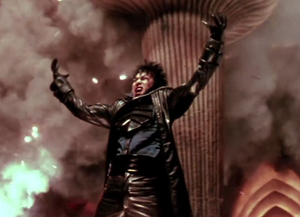 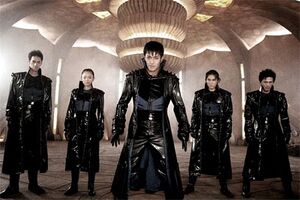 X and his crew