The Convicts are a boss from the 2006 video game Dead Rising by Capcom. They are a group of escaped prisoners driving a hijacked military Humvee, at the Willamette Parkview Mall. They're found driving around Leisure Park, in the center of the mall, where they ambush and attack anyone they see, treating it as a game, and referring to their victims as "Contestants".

The Convicts act as an obstacle boss for Leisure Park, which works as a shortcut for crossing to various parts of the mall, preventing you from escorting survivors through it. They're encountered three times in the park, spawning the first time at 6:00 PM on the first day, and then respawning at midnight on the first and second day.

The Convicts are first encountered by Frank West as he's walking through the park, where he's almost killed as they come barreling towards him swinging at him with a baseball bat. Frank manages to duck just in time, leaving him speechless as they pull over next to him, laughing and cracking jokes at each other. They suddenly notice two new people walking through the park and forget Frank to go after them, who they refer to as their "next contestants". They speed after the two, Sid and Sophie, who quickly try to run away, but this proves useless however as they speed by and kill Sid with a bat, the same way they tried to with Frank.

There are three convicts driving the driving the Humvee, Sam Franklin, Miguel Sanchez, and Reginald Jenkins. Each convict must be killed to completely beat the boss, and in one sitting, if you kill one and leave, he'll have respawned when you return.

"You better watch out ese!"

Once all the convicts are defeated, the boss is officially beaten and won't respawn until the following midnight. Upon defeating them the first time, you're given Sophie as a survivor, while the other two times act only as an obstacle. 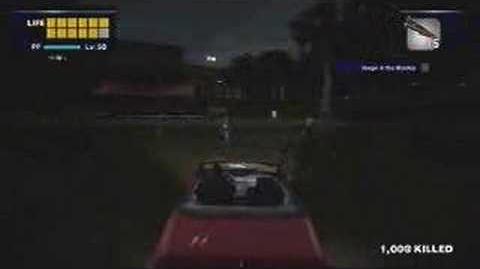