He was portrayed by James Biberi.

In the film, Cook acts as the cover for Nino (the co-main antagonist), to rob a Pawn Shop and steal money that belongs to the East Coast Mafia, as a way for Nino to get revenge on them for the continuous humiliation for his Jewish heritage.

The Driver (the film's protagonist) meets Irene a young beautiful woman who he starts falling in love with, she and her son Benicio live in the same building as he does, but her husband called Standard Gabriel is about to be released from prison. The Driver meets Standard on his "Welcome Back" party.

One day, the Driver sees Cook and another man on the parking lot of the building carrying a pipe, he follows them and finds Standard on the floor beaten up and bleeding as Benicio hides in terror, the Driver helps them and Standard tells him he owe money to the mafia as they protected him while in prison and they want him to rob a Pawn Shop to pay his debt but Standard refused, the Driver and him agree to not say anything to Irene and that he would help Standard, then Benicio gives the Driver a bullet that Cook and the other man gave him.

The Driver and Standard meet with Cook, as Cook doesn't trust them he sends Blanche with them, one of his girls at a strip club. On the day of the robbery, the Driver parks outside the Pawn Shop, Blanche and Standard come out of the car and enter the shop, the Driver then sees another car park near the shop, Blanche comes out of the shop with a bag full of money, she enters the car and waits for Standard who comes out but is shot and killed by the shop's owner, the Driver escapes with Blanche and the money, but the other car follows them, the Driver loses them and they hide in a Motel, the Driver interrogates Blanche, she tells him that Cook will send another car to take the money from them, but she didn't knew someone will die, the Driver orders her to take him with Cook but two assassins enter the room and kill Blanche, the Driver kills them both and then hides with Shannon, his boss and friend who knows Nino and his friend Bernie, Shannon helps the Driver asking Bernie about Cook.

The Driver locates Cook at a strip club where he breaks Cook's left hand with a hammer, Cook falls to the ground in pain, then Driver threatens to kill him with the same bullet he gave to Benicio, Cook finally breaks and makes one of the girls call Nino, the Driver then makes Cook swallow the bullet, he talks to Nino on the phone, he offers to deliver the money pacifically and stay out of trouble, however seeing his cover blown, he sends a hitman to the Driver's apartment building. Entering the elevator with Irene, the Driver encounters the hitman. He then kisses Irene and brutally beats the hitman to death. Afterwards, Irene exits the elevator stunned and horrified.

At his pizzeria, Nino reveals to Bernie that the money was stashed at the pawnshop by a low-level Philadelphia wise guy from the "East Coast mob" and, since anyone tied to the robbery could lead the East Coast Mafia to them, they need to kill everyone involved. Cook is there listening and offers to kill the Driver, but Bernie shuts him, Bernie warns Nino that nobody steals from the Italian Mob. Nino is angry because the Italian Mob has marginalized and insulted him due to his Jewish heritage. He convinces Bernie to follow his plan, as Cook is the sole witness to their agreement, Bernie murders Cook stabbing him in the eye with a fork and then in the neck with a cooking knife. 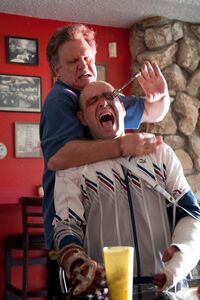 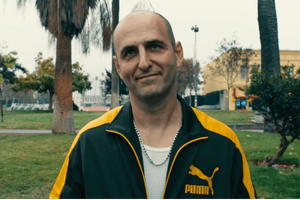 Add a photo to this gallery
Retrieved from "https://villains.fandom.com/wiki/Cook_(Drive)?oldid=3400463"
Community content is available under CC-BY-SA unless otherwise noted.