Eat the scientist and his grandchildren.

Parody Predator
Cookiesaurus is a titular main antagonist of the Sesame Street short video, Jurassic Cookie, which is a parody of Jurassic Park.

Cookiesaurus appeared as a giant gingerbread cookie that is shaped like a dinosaur, similar to a gingerbread man.

Cookiesaurus wanted to eat anything that moves and this is why he chased the Scientist and his grandchildren, but hugging it makes it calm down and stop attempting to eat the one who hugs it. 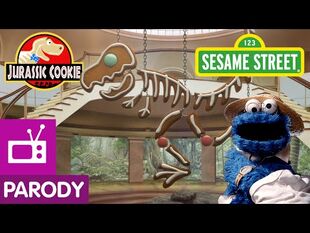