To rebuild his ship and return home to his planet (succeeded).

He was portrayed by Bruce Greenwood.

Cooper is a humanoid alien that stands up to 12 feet tall with six limbs and gray skin with white strips also has secondary membrane-like eyelids that cover his real eyes. Aside to protect his eyes from harm, the secondary eyelid may also be used to expresses anger or bitterness, as after talked some sense with Joe telepathically, Cooper opened the said eyelid and left to finished his project to build machine to rebuild his disassembled starship.

Prior to the events of the movie, in 1958, Cooper crash-landed on Earth and was captured by the military. He was placed in a holding cell for observation and under the care of Dr. Thomas Woodward who he came in contacted with. Woodward then realized that all Cooper wanted was to rebuild his ship so he may return to his planet. But Colonel Nelec did not care about it. Therefore, he intended to have Cooper killed so his physiology could be studied.

21 years later in 1979, Cooper was transported to another military base under the command of Colonel Nelec somewhere near Lillian, Ohio. However, on the way to the base, the train crashed when Dr. Woodward drives a truck right into it on purpose, which allowed Cooper to escape and established a temporary lair under the town. Afterwards, he stole various electrical equipment available in the town and captured some humans and local pets for food stock, including Alice. Why he stole the equipment was so he can rebuilt sophisticated device that can attract hi-tech cube that his ship composed of. However, this attracted Nelec's attention due to the town's citizens becoming concerned with missing people and electrical equipment thievery across the town.

To keep the civilians from knowing what he and the alien do, Nelec commenced Operation: Walking Distance to cause faked forest fire so everyone immediately evacuated. This also includes disposing Dr. Woodward for his rebellion and other people whom know too much about the alien. As Nelec captured Joe and his friends to be executed inside a bus, Cooper, whom sees the opportunity to avenge his torture by the Colonel, attacked the bus and managed to kill Nelec's men, but indirectly saving the kids' lives in the process as they barely manage to escape. Meanwhile, after most of the soldiers were killed, Nelec tried his best to stop Cooper, but fails and momentarily witnesses a close glared on the alien before Cooper then bits his head off, killing him at an instant. Soon after, Cooper leaves the wrecked bus while the children watch from a safe distance.

While Joe and Cary find Cooper's lair and look for Alice, Cooper returns and starts eating some civilians before resuming his job; Joe notices Alice, he then asks Cary to use his firecrackers not as a weapon but a distraction, Cooper continues working he is nearly about to eat Alice, however Cary finally lights the fireworks near one of the tunnels. This resulting the alien leaving Alice alone and runs off to investigate the cause of that sound. By the time the trio and other captured civilians made their way to escape, Cooper then smells them and heads back, chasing after them.

He brutally grabs Sheriff Pruitt and kills him, the remaining four runs for their lives. Cooper then killed the woman, leaving just the kids. The trio come to a dead end and are confronted by Cooper. While Cary and Alice panic as Cooper approaches then, Joe walks toward the alien. Cary and Alice watch as Joe starts speaking to Cooper, not expecting Joe to try to reason with him. Cooper then grabs Joe, who quietly speaks to the alien, telling him over and over that "bad things happen" but that he "can still live". After studying Joe for a moment and sees his memories through their physical contact, Cooper, apparently realized that there are other humans who are good to him just like Dr. Woodward among bad ones, spared him as he heard his device was fully activating. Cooper puts Joe safely back down to the ground and departs.

Cooper was last seen giving after giving finishing touches on the device, that allowed his disassembled ship to reform before he then boards it and finally departs back to his homeworld. 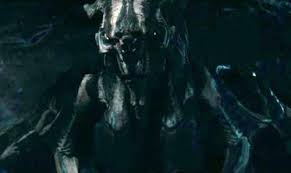 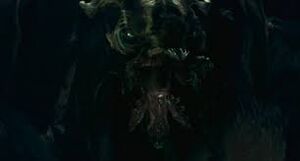 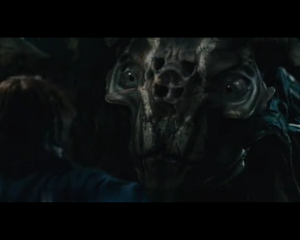 Cooper looking at Joe Lamb with his real eyes. 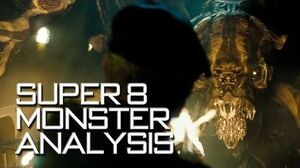