Cop Morty is the secondary antagonist in the Rick and Morty episode "The Ricklantis Mixup". He is a corrupt police officer that is paid by a drug lord, Big Morty, to maintain the peace in a ghetto part of the Citadel of Ricks called "Mortytown". This changes when Cop Rick is his new partner and ultimately ends with Cop Rick shooting Cop Morty in the head for killing Big Morty and attempting to kill him.

Cop Morty appears when Cop Rick is assigned as his new partner and meets him during a Morty Lives Matter rally/protest that is occurring on the streets in the Citadel of Ricks (which was re-established after the events of "The Rickshank Redemption"). Cop Morty is yelling anti-Morty sentiments and slurs (such as "yellow-shirts") to any Morty he notices. He even tasers any Morty that is near his car, which surprises Cop Rick. Despite Cop Rick calling him out, Cop Morty digresses and says that no one cares about broken codes or corruption. The pair are then called to attend to a robbery committed in "Mortytown," a ghetto populated by Mortys who, for some reason or another, were deemed unsuitable for pairing with another Rick. Later during the episode, Cop Rick and Cop Morty arrive in Mortytown to investigate the reported robbery, where Cop Rick learns more about the resident Mortys and what conditions they live with. The pair question the Morty Mart Manager Morty, who describes the robbers' appearance as four normal-looking Mortys. Whilst Cop Rick attempts to attain more information, Cop Morty uses his Morty-like nature to attempt to get some insider information from some vandalizing Mortys. After the vandalizing Mortys criticize him on his uniform and his relation to Rick, Cop Morty snaps, forcefully interrogating them (putting a gun into one of the Morty's mouth) and learning that a group called the "Mortytown Locos" were the ones who committed the crime. Cop Rick, shocked at Cop Morty's violation of codes, is ordered to get back into the car. While they're in "Mortytown", they arrive at a broken down house. Cop Rick and Cop Morty then break down the door, apprehending three of the Mortytown Locos. Bootleg Portal Chemist Rick attempts to escape through his own portal fluid, only to be killed due to issues of its bootleg-nature. Cop Rick then scouts around upstairs to find the fourth member of the Mortytown Locos, who plays with Rick's sympathy and stabs him in the shoulder. Rick quickly shoots the fourth member, and Cop Morty comforts Rick, saying that it is alright to put your faith in Mortys, but only the right ones. As Rick leaves to get medical treatment, Cop Morty then destroys the building with three Mortys inside, intent on leaving no witnesses or evidence. Following their recent handling of the Mortytown Locos, Cop Morty takes Cop Rick to a club called The Creepy Morty, where he meets Big Morty, a drug-lord who presents Cop Rick and Cop Morty with money for their efforts. Cop Rick, having moral issues with this action, attempts to make an arrest of Big Morty, but causes a shootout in the club. During this shootout, Cop Morty tackles Big Morty to the ground, ready to kill. However, Cop Rick attempts to get Cop Morty to do the right thing, knowing he is capable of doing so. Cop Morty responds emotionally, only to end Big Morty and tries to shoot Cop Rick, which causes Cop Rick to kill him in self defense. Cop Rick leaves the club, where he submits to the other police officers over the death of the many Mortys in the club but is released after Evil Morty takes over the Citadel of Ricks. Cop Morty's corpse is seen floating in space along with the other Ricks and Mortys that were killed during the end of the episode. 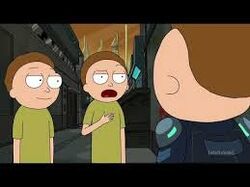 Tales From The Citadel - Cop Morty's Story (Rick and Morty Season 3)
Add a photo to this gallery
Retrieved from "https://villains.fandom.com/wiki/Cop_Morty?oldid=2235404"
Community content is available under CC-BY-SA unless otherwise noted.