Guarding the Factory of a Better Tomorrow.

Guard the Factory of a Better Tomorrow (formerly).

Stop the Alliance from getting the Sackbots.
Kill Sackboy.

Copernicus is an antagonist from the 2011 puzzle platforming video game LittleBigPlanet 2. It is a giant mechanical "Guard Turkey" that Clive Handforth built to serve as a guard for his Factory of a Better Tomorrow, but was later taken over by the Negativitron to turn on the Alliance.

Clive built Copernicus (as well as presumably other guard turkeys) to protect the Factory of a Better Tomorrow, though Clive later admits Copernicus was the "worst Guard Turkey [he] ever had", indicating Copernicus was not good at its job.

During the events of LittleBigPlanet 2 in the level "Fowl Play", after Sackboy frees the captured Sackbots from the Factory, the Negativitron takes over Copernicus and makes it attack the heroes. Sackboy is forced to flee through the crumbling Factory and explosives as Copernicus chases him, crushing everything in its wake and attempteing to either step on Sackboy or ram him. Eventually Copernicus will fall into a pit of lava, seemingly to its doom Sackboy will progress forward, only to find Copernicus still active, but burnt. Copernicus resumes the chase until it corners Sackboy. However, Clive pulls a leaver that drops a platform on Copernicus, destroying it.

While it is unknown what Copernicus was like before it was taken over, when it is under the Negativitron's control it is wrathful and violent, lashing out and destroying everything to get to Sackboy. Even falling in lava will not stop it, only total destruction will stop it from reaching its goal. 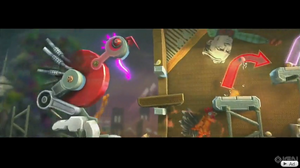 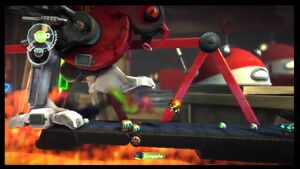 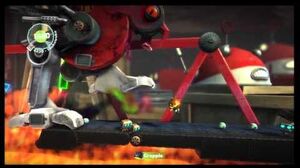 Retrieved from "https://villains.fandom.com/wiki/Copernicus?oldid=3888610"
Community content is available under CC-BY-SA unless otherwise noted.