Dispose of the Reploid Resistance and forever rule over the city of Neo-Arcadia.

Copy X, also known as "Master X" and "X", is the secondary antagonist of the Mega Man Zero series.

Copy X is a Reploid that is a clone of the original X, created by the scientist Ciel to take the place of X as ruler of Neo Arcadia, since X used his own body to seal the Dark Elf.

However, Copy X had a different vision from the original X, because he was not put to sleep for at least 30 years and his reliability was never tested. He felt that the humans must be put above all else, considered Reploids to be second-class to humans, and when the energy crisis started, he began to hunt down Reploids at random, wrongly accusing all of them of being Mavericks, using them as scapegoats for the crisis.

The few who survived, organize a resistance against Neo Arcadia, and Ciel joins them, feeling guilty for what Copy X became. His army, led by his loyal guardians Harpuia, Fefnir, Leviathan and Phantom, slowly crushes the resistance.

Copy X appears as the main antagonist. Although he is never seen until the end of the game, he is a powerful and ominous presence in the mind of the Resistance force. Without more options, Ciel decides to find the lost legendary Reploid known as Zero to help them in their fight. They finally find the chamber where he is hibernating, but they are followed by Copy X's forces. Ciel manages to awake Zero, who then opens the way out of the place and saves Ciel. Zero then helps the resistance, eventually defeating the four guardians and making his way to Neo Arcadia. After Phantom self-destructs, the remaining 3 guardians attempt to bar his entrance to their master, but Copy X himself appears and tells them to leave.

He tells Zero he has been looking forward to this moment and claims that he has built a utopia for humans that neither Zero nor the original X could create. Zero battles Copy X in his ultimate armor and defeats him for the first time. Zero says that he remembers the original X being mightier. Copy X furiously transforms into his final form, a massive seraph form. Zero battles him and narrowly defeats him a final time. While dying, Copy X says he was supposed to be perfect and that he will never forgive Zero. He then sets his base to self-destruct in an attempt to destroy Zero, but Zero escapes.

Much time later, he is resurrected by Dr. Weil, who uses him on his plan to take control of Neo Arcadia. Copy X has a noticeable stutter, and his eyes are now blue instead of red.

After the first four judges are defeated, Copy X and Dr. Weil send a missile to a human residential area (Area Z-3079) to catch the Dark Elf. Therefore, when Copy X and Dr. Weil contact the Resistance asking her to surrender and hand over the Ciel System, Ciel refuses to deliver it, because she created it to bring peace between humans and reploids and they weren't above to sacrifice lots of innocent lives to catch the Dark Elf. Later, Zero defeats some revived robots from Megaman Zero 1, infiltrates in Neo Arcadia and challenges him, defeating him once again, but when he tries to power himself up, a bomb that was inside of his body is triggered, causing him to self-destruct. Weil easily takes over Neo Arcadia after this, becoming it's new ruler, saying that X had sadly passed away thanks to bloodthirsty extremists. As the series ends with Megaman Zero 4, it is unknown if he would have ever made a reappearance, if the series did continue, he may have been resurrected yet again but Neo Arcadia, Weil, and the guardians were all destroyed so it may or may have not been unlikely.

Copy X appears shortly along with his Ultimate Armor in the Rockman Zero manga, where he is an unnamed fusion of the Four Guardians created by Cial, who refers to him as the "Perfect Reploid". He overwhelms the battle-weary Zero using his Nova Strike and deals a serious blow, reverting Zero into his meek self. Believing he had already won, he prepares to kill Zero, but Lito tries to protect Zero. Angry, he throws Lito away and would have killed him, but Zero gathers up the courage and strength to fight back without his helmet, impaling the Perfect Reploid from behind using his Z-Saber. Without the Four Guardians, the Resistance was able to defeat the Neo Arcadian armies. Copy X was noticeably much more psychotic than his original depiction as seen through his facial tick.

Despite being proclaimed himself to be the perfect copy of the original Megaman X in every way, Copy X has the distinction of being a main incarnation of Mega Man who is outright evil. The standard by which he views himself creates a warped sense of justice in which any decision he makes is right by virtue of being a perfect copy.

Zero makes note of this difference after defeating Copy X the first time by calling him naive, suggesting that he lacked the experiences and memories of the original X to properly understand justice and rule Neo Arcadia as X did. However, Copy X disregards this, and doesn't hesitate to stand up for himself and his perfection.

Above all, Copy X is an extremely arrogant narcissist, overestimating himself and his own role as a ruler. 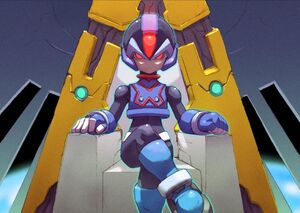 Master X sitting on his throne as ruler of Neo Arcadia. 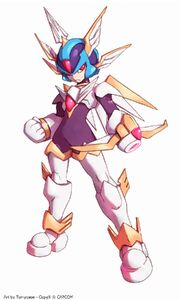 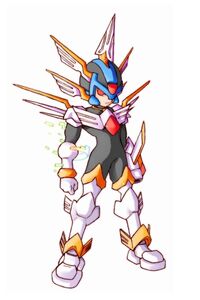 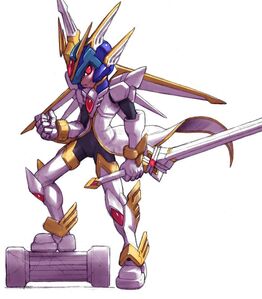 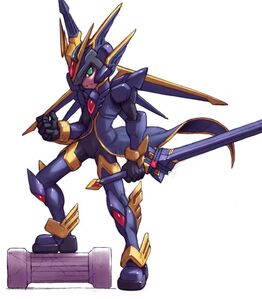 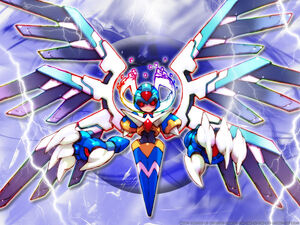 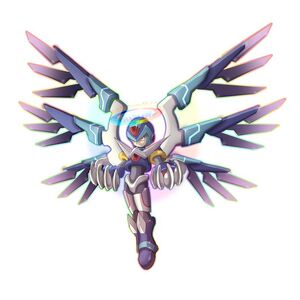 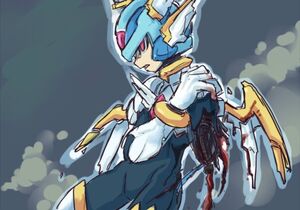 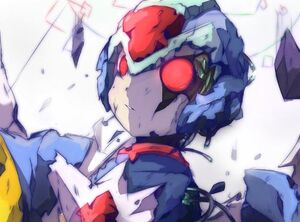 A fallen Copy X after his failed climactic battle with Zero. 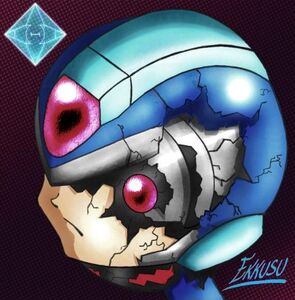 An artwork of the damaged face of Copy X. 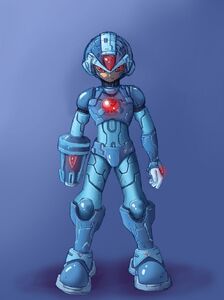 The Perfect Reploid aka Copy X. 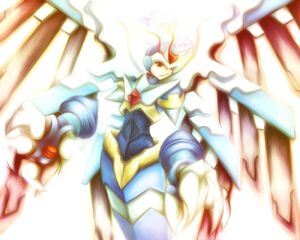 The Perfect Reploid aka Master X. 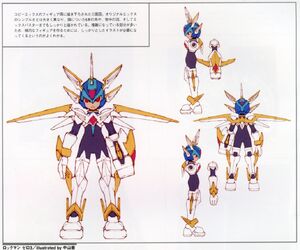 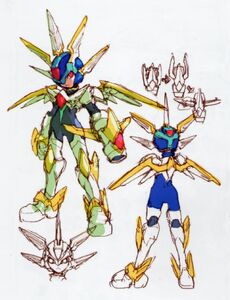 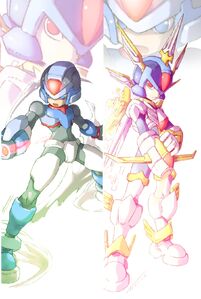 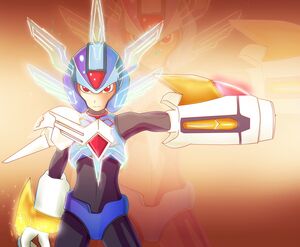 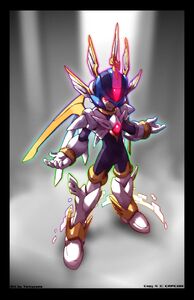 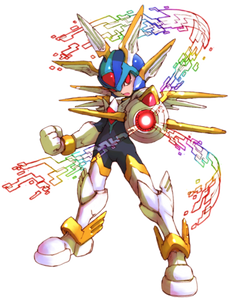 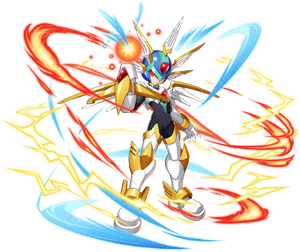