Escalate tensions between Gjallarhorn and Mars in exchange for monetary support from Nobliss Gordon.

Corrupt Official
Major Coral Conrad is the corrupt head of the Gjallarhorn Mars Branch and a major antagonist in Mobile Suit Gundam IRON-BLOODED ORPHANS, appearing in the first five episodes.

He is voiced by Hiroshi Yanaka in the original Japanese version and by John DeMita in the English dub.

Coral Conrad is first seen conspiring with Norman Bernstein, the father of famous Mars Independence activist Kudelia Aina Bernstein, to have his daughter assassinated while she was being guarded by Chryse Guard Security in order to escalate tensions between Gjallarhorn and the people of Mars. Coral sent a company spearheaded by First Lieutenants Orlis Stenja and Crank Zent to CGS's base with the aim of killing Kudelia. Though the Gjallarhorn forces initially overwhelmed the CGS forces with their Mobile Suits, after Mikazuki Augus entered the battle in the Gundam Barbatos, he was able to fight off the Mobile Suits, even killing Orlis, and force the Gjallarhorn forces to retreat.

Coral was later visited by Gjallarhorn Inspectors Gaelio Bauduin and McGillis Fareed for an audit. After the two noticed that a company had been sent out and had not returned, the two requested an explanation from Coral. Coral came up with an excuse and tried to bribe the two Inspectors, but McGillis rebuked his bribery.

Angry that the failure to kill Kudelia meant he wouldn't receive funding from Nobliss, Coral gave Crank Zent a chance to redeem himself for his failure and sent him out to try and capture Kudelia. However, Crank was beaten in battle by Barbatos and slain by request to Mikazuki so his men would not be punished for his failure.

Later, as the Tekkadan were leaving Earth with Kudelia, Coral led an intercept them and went out in battle himself in his Graze Mobile Suit. However, he was slain in battle by Mikazuki in the Gundam Barbatos, who impaled Coral with the Barbatos' mace. 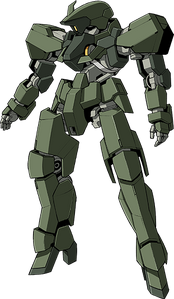 EB-06s Graze Commander Type
Add a photo to this gallery

Retrieved from "https://villains.fandom.com/wiki/Coral_Conrad?oldid=3880770"
Community content is available under CC-BY-SA unless otherwise noted.