Serve Lord Voldemort and assist him in taking over the Wizarding World.

Control Pius Thicknesse with the Imperius Curse (both failed).

He is portrayed by Peter Mullan, who also played General Sitacles in Hercules.

Harry Potter and the Half-Blood Prince

In the sixth Harry Potter book, Yaxley is one of the Death Eaters invading Hogwarts. He is present when Dumbledore is killed and fights in the battle before leaving the castle with his fellow Death Eaters.

Harry Potter and the Deathly Hallows

Yaxley appears at the table during the Death Eater's meeting held at the Malfoy Manor. He confidently informs Voldemort that he overheard the date of when Harry Potter is going to be moved from Private Drive, the house of his aunt and uncle's.

However, Severus Snape corrects Yaxley that The Order of the Phoenix tricked him by rumouring a false move date, allowing Yaxley to think he'd figured them out.

As Yaxley is the Head of Magical Law Enforcement, he also has a hand in the Muggle-Born Registration Commission, a position he is clearly unashamed of, as he openly threatens Reginald Cattermole's wife, Mary, over a minor disagreement at the Ministry of Magic. We later find him at Mary Cattermole's trial with Dolores Umbridge, the Head of the Muggle-born Registration Commission.

The trial is interrupted, however, when Reginald Cattermole (Ronald Weasley in disguise), Albert Runcorn (Harry Potter in disguise), and Mafalda Hopkins (Hermione Granger) rescue Mary by unleashing Dementors and flee the courtroom. Although Ron does manage to stun Yaxley, he recovers quickly and gives chase. Leaving Mary with her real husband in the atrium, the trio accesses the Floo Network, but not before Yaxley grabs hold of Hermione. She had already begun to apparate to Grimmauld Place and brought him with them.

Realizing the mistake and danger, Hermione quickly disentangles herself from him and takes Ron and Harry to safety, leave Yaxley on the front stoop of 12 Grimmauld Place. He later fights in the Battle of Hogwarts and he's present when Voldemort attacks Harry in the Forbidden Forest. His exact status after the Battle of Hogwarts is unknown, it can be presumed he was either killed in the battle, or later captured and imprisoned under Kingsley's Shacklebolt's de-corrupted Ministry of Magic, along with all other Death Eaters and their allies. 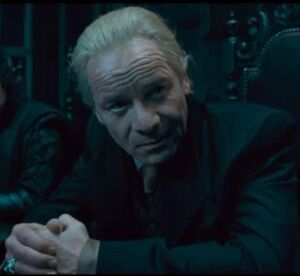 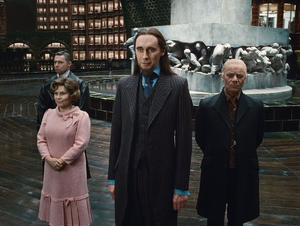