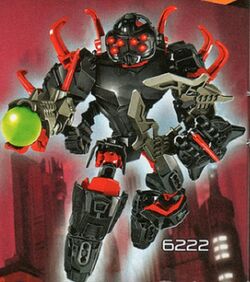 A former hero turned rogue that escaped during the Breakout and seeks the Doom Box weapon to control the galaxy.

He forms an alliance with one of the Doom Box's creators, Arctur.

Once a hero and best friend of Preston Stormer, he gets corrupted and goes to life of crime hunting down any Heroes and removing their Quaza cores.

He failed to escape off the planet and gets arrested and sent to Villain Storage. Later he escapes during the Breakout.

After Black Phantom 's plan fails, he bought a map from Speeda Demon for the three Doom Box's fragments locations showing that they are spread out across the galaxy. He travels the universe to retrieve the missing fragments of the ultimate weapon and to use the Doom Box to destroy other planets and be the ruler of the universe.

Hunter uses the overloaded energized weapon to knock down the Heroes and kill his partner, Arctur.

He tries to bribe Surge for a position on his new empire but he refuses and fires his Electric Shooter at him, causing his new powers to reverse and shrink him into a oblivion.

Extremely methodical and precise, he is skilled in hunting his quarry and able to defeat any Heroes one-on-one. With a surgical intelligence and perfectionist attitude of his career,he is outfitted with multi-vison goggles and spiked armor.

He is short-tempered and power-hungry.

He possessed a plasma shooter and his favorite weapon, a Hero Core removing tool.

For a wired reason he,was one of the only villains who didn't appear in the tv episode breakout.

Retrieved from "https://villains.fandom.com/wiki/Core_Hunter?oldid=3366180"
Community content is available under CC-BY-SA unless otherwise noted.