Shit-Bird (by Edwards)
Sheets (in the book)

Keep Dunbar's journal and have him hanged.

Eliminate the Sioux (both failed).

Mischievous Trickster
Corporal Spivey is the secondary antagonist of the 1990 Kevin Costner film Dances with Wolves. He is a mischievous corporal who steals John Dunbar's journal and tries to get him executed.

He was portrayed by Tony Pierce.

Spivey is a very mischievous, sadistic, arrogant, cruel, immature, greedy and dimwitted jerk who enjoys mistreating Dunbar. When he found Dunbar's journal at Fort Sedgewick, he decides to keep it. However, he only kept it for himself, especially since he's illiterate. When Dunbar explains his orders in the journal, he lies to Lt. Elgin about not knowing anything about his journal. He even tries to steal Dunbar's pendant and doesn't even consider turning the journal in, despite knowing that Dunbar is going to be hanged without the notebook supporting his story. He also took great sadistic pleasure in killing Two Socks purely for sport, alongside the other soldiers. Whenever Dunbar attacks him, he retaliates and resorts to attacking him, only to be stopped by Lt. Elgin.

When the U.S. Army arrives at Fort Sedgewick, he and Edwards find a journal belonging to John Dunbar in one of the bunkhouses. He was the first to arrive at the fort and thinks about turning in the journal to be rewarded, but on second thoughts, he fears that he would be put in the stockade for theft, so he hides it.

When Dunbar realizes that his journal is at the fort, he returns to retrieve it to prevent the army from learning about his whereabouts, but the soldiers shoot his horse, Cisco and arrest him as a traitor. They bring Dunbar to one of the bunkhouses, where Bauer and Spivey guard him. Bauer orders Spivey to inform Major Hatch and he brings him to the bunkhouse. Bauer interrogates Dunbar and he reveals that he speaks English. He tells them about him being transported to the abandoned Fort Sedgewick and Lieutenant Elgin asks him for proof. Dunbar tells them about his orders in his journal and Spivey claims that he hasn't seen the journal. They head out to search for the journal, only to return with no evidence.

The soldiers take Dunbar outside and order him to keep his eyes front as they shove him. Dunbar retaliates by attacking the soldier, but the other soldiers brutally knock him unconscious and bring him back to the bunkhouse. Dunbar wakes up and Elgin hands him a tissue paper to clean the blood off his face. The soldiers offer to give him a second chance and guide them to the Sioux villages, but he refuses and says his Sioux name in Lakota, frustrating the Major and surprising Spivey. Elgin orders Bauer to take Dunbar to the river to clean up his face and he does so, but excludes Spivey. Spivey watches from the bushes, holding Dunbar's journal and using it as toilet paper. Edwards comes and offers him to give him some paper. He tears off a page and throws it to Edwards.

Bauer takes Dunbar back to the bunkhouse and Spivey walks into the bunkhouse as he hands him a bowl of food. Spivey checks to see Bauer off his guard and notices Dunbar's pendant on his breast plate. He tries to steal it, but Dunbar apprehends him. Dunbar tries to call for Bauer and he gets up laughing. Bauer taunts Dunbar and he kicks the bowl back at Bauer. Spivey charges at Dunbar, but Bauer stops him and declares that they will have him hanged back at Fort Hays, much to Dunbar's dismay.

They get on a wagon with Dunbar and head off on their journey to Fort Hays. Edwards notices Two Socks standing on a hill and the soldiers shoot at the wolf. Dunbar wakes up and knocks Spivey to the floor, strangling him with his shackles, but Bauer hits him and Spivey frees himself. The soldiers continue shooting at Two Socks until Edwards manages to mortally wound him. Edwards gets off the wagon to retrieve Two Socks, while Spivey kicks Dunbar and orders him to get up. Elgin stops Spivey and threatens to put him in shackles if he continues beating up Dunbar. He then stops Edwards from going any further and he heads back to the wagon. It is revealed that the Sioux are waiting on the other side of the hill and the wolf sacrificed himself to save them from getting caught by the soldiers.

They arrive at a river and the soldiers check to see if there are any Indians. Spivey and Edwards taunt Dunbar and they continue moving once the soldiers inform them that there are no Indians. However, they get a surprise attack from the Sioux and the soldiers try to retaliate, but Dunbar knocks them off the wagon. Dunbar strangles Spivey with his shackles and drowns him, while the other soldiers are killed by the Sioux warriors. One of the warriors pulls the journal out of Spivey's pocket and throws it into the river, but Smiles A Lot retrieves it and returns it to Dunbar back at the winter camp.

Despite the victory, Dunbar realizes that the tribe is still doomed and part ways with the Sioux as he leaves with Stands With A Fist. The tribe leaves their winter camp before the U.S. Army and their Pawnee scouts could seize them. It is stated that 13 years later, the last band of free Sioux were forced to surrender to the U.S. Government and live within white society. 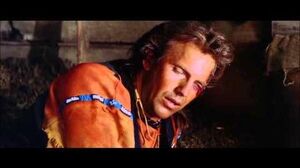 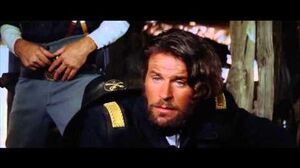 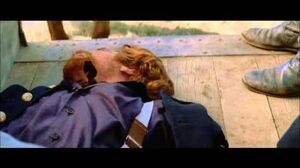 The Death of Two Socks (Director's Cut)
Spivey and the other soldiers killing Two Socks. 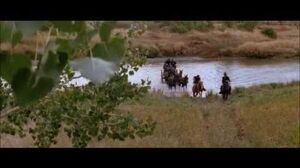