The Albains
Brother (by each other)

Corsac and Fennec Albain are major antagonists in the American cartoon series RWBY. They are two representatives of the White Fang under Adam Taurus.

Corsac and Fennec are voiced by Derek Mears and Mike McFarland respectively.

In "Menagerie", Corsac and Fennec arrive at the Belladonna home, two representatives of the White Fang, who reveal Ghira was the former leader of the organization. Their conversation is quickly interrupted by Blake and Sun, who are distressed at Ghira talking to the people who contributed to Vale's destruction. Ghira demands the truth from the White Fang representatives, who pass the actions off as those of a splinter group led by Adam Taurus. They offer to show him their plans to take action against the Vale branch, but Ghira sends Corsac and Fennec away to spend time with his daughter instead. Before the latter two leave, they also offer Blake an opportunity to return to the White Fang, mentioning the possible delight of another member named Ilia Amitola as they do so.

In "No Safe Haven", The Albains, as they walk away, comment on Blake's presence as an interesting development and decide to tell Adam Taurus about it, revealing that they are not actually at odds with him at all.

In "Unforeseen Complications", Corsac and Fennec are seen at the press conference held by Ghira Belladonna where he discusses the revelations revealed in Ilia's scroll. There, they are accompanied by other members of the local White Fang branch in Menagerie and they listen to what their former High Leader has to say. They hear about Adam's plan to overthrow Sienna Khan and take over the White Fang organization as a whole and talks about how he must be stopped, unaware that Khan was already ousted from power and Adam took over. During the conference, Ilia reveals herself and calls the entire Belladonna family traitors and the worst kind of Faunus before running away before Sun could apprehend her. The White Fang escorts they had run off to get her and the two of them smile knowing that their plan remains in motion.

In "Necessary Sacrifice", at a hidden White Fang hideout, Corsac and Fennec Albain summon Ilia. They tell her the news of Sienna Khan's death as well as her next mission: to "silence" the Belladonnas, with the exception of Blake who is to be left alive and brought to Adam. Ilia shows hesitance over this as she leaves. Fennec questions if Adam is the right one to lead the White Fang, but Corsac says they do what is best for the Faunus. Another Faunus, Yuma, enters the room, reporting to the Albains that he has prevented Ghira's messenger from reaching Mistral.

In "Alone Together", Corsac and Fennec personally lead the White Fang during the attack on the Belladonna Household. Finding Ghira, the brothers prepare to fight to depose the chieftain permanently.

In "A Perfect Storm", Corsac and Fennec manage to overwhelm Ghira and deplete his Aura. However, before the two can finish him off, Blake and Sun appear and push back the Albain twins and Blake briefly traps them in an ice clone. Ghira tells Blake to go find Kali and leave the Albains to him and Sun. As Blake leaves the room, the brothers break free of the ice and prepare to continue their battle.

In "True Colors", Ghira and Sun drive the Albain brothers into the meeting room where Blake is fighting Ilia. During their battle, Ghira makes Fennec accidentally shoot Corsac with his dagger and Sun knocks the former out. When Ghira and Sun are distracted saving Ilia from the collapsing upper walkway, Fennec regains consciousnesses and leaps toward Ghira with his daggers in a final attempt to kill him. But Blake pulls her father out of the way with Gambol Shroud at the last second and Fennec lands under the walkway as it gives out and collapses on top of him, crushing him to death. Corsac, enraged at the loss of his brother and their failure to kill the Belladonnas, is about to attack again until Ilia betrays him and knocks him out with her whip. Corsac is later arrested along with the other White Fang members after the attack.

The Albain brothers appear as units in RWBY: Amity Arena. When deployed, they act as a pair of powerful melee fighters.

Both wear white robes with red hoods, and both look virtually the same barring their height and Faunus trait. Corsac, the taller, has a corsac fox tail, whereas Fennec has fennec fox ears.

Corsac and Fennec are not too dissimilar from each other personality-wise. They are rather soft-spoken individuals, but this belies the lengths they are willing to go to promote the White Fang's beliefs in what is best for the Faunus, which includes assassination. Unlike Fennec, Corsac appears more readily willing to follow Adam Taurus' leadership, despite acknowledging the questionable state of Adam's mental health. He acknowledges that Adam's leadership may not last very long, but believes it to be the best course of action, for the time being. Fennec was more hesitant of Adam Taurus' leadership due to having acknowledged the questionable state of Adam's mental health and drastic measures he is willing to take. He was willing to follow Adam's leadership regardless, but overall questioned if it was truly beneficial to the White Fang. This doubt, however, was alleviated at Corsac's assurances. He also shows concern for his brother when he is attacked by Ghira twice.

They are both shown to be manipulative, convincing Ilia Amitola that assassinating Ghira and Kali Belladonna is necessary, and that Ilia should use her former friendship with Blake to help accomplish this.

However, after his brother’s death and Blake Belladonna’s rallying speech, Corsac starts to show regret, and to a degree, remorse and confusion towards his actions. 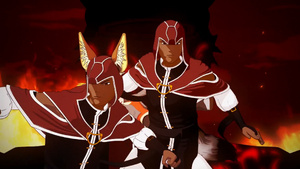 Corsac and Fennec in the Volume 4 opening. 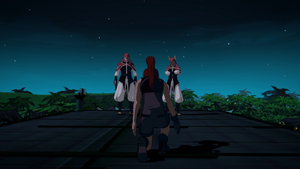 Ilia kneeling before the Albain brothers. 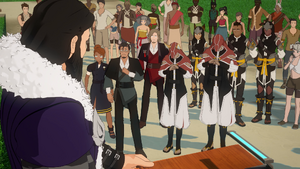 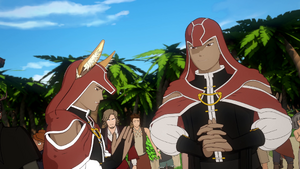 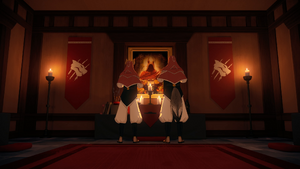 The Albain brothers at the hideout. 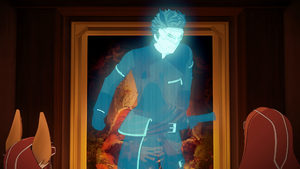 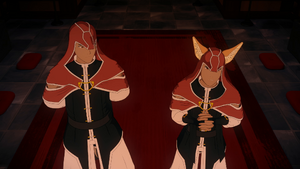 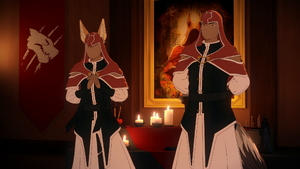 White Fang member Yuma reports in to the Albains. 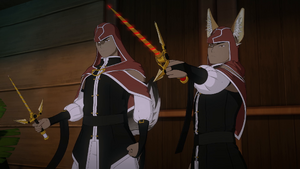 The Albain brothers prepare to fight.. 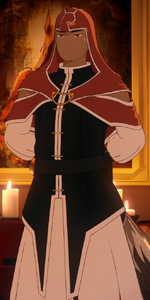 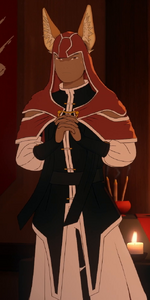 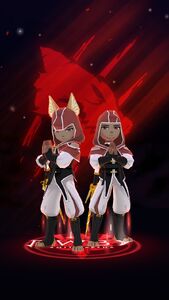