Punishing the Demon Sisters for their failures.

Corset is the main antagonist in the anime series Panty and Stocking with Garterbelt. He is the mayor of Daten City and a powerful demon who may be the father of Scanty and Kneesocks (although it is also probable that he is just their employer). Corset first appears in the episode D.C. Confidential.

He was voiced by Hiroyuki Yoshino in the Japanese version and the late Christopher Ayres in the English version, whom the latter also played Frieza, Yoshihisa Kira, and Lieutenant General Raven.

Corset is a demon with light purple skin, red eyes, bony features and white, conical hair. His face is often contorted into a sick grin. He wears black clothes with a white tie, black buckles all over his body and a white corset he often tightens when he gets especially enraged or excited.

Corset is a cruel and strict demon and a very severe employer to Scanty and Kneesocks, whom he often punishes by dumping them into toilet water when they fail to perform their duties correctly. He enjoys crushing his enemies' hopes and mocking them as they fail.

Corset's goal is to unlock the gates of Hell and unleash the Ultimate Ghost to take over the world. To do this, he requires a key known as "Hell's Monkey", which turns out to be Brief's penis. Using this Ghost, he seeks to conquer Heaven and Earth and impose a cruel dictatorship devoid of freedom. Even though he fails to give Brief an erection using his own bondage abilities, his plan succeeds when Panty has sex with Brief and thus unwittingly awakens the key. He also manages to kill Garterbelt (but it does not stick, since Garterbelt is immortal). However, both Corset and the powerful Ghost he summons are destroyed when Panty and Stocking manage to summon their mother (who seems to be this universe's equivalent of God), who crushes both Corset and his ghost under her heel.

In the very last minute of the show, after Stocking reveals that she is a demon and cuts Panty into 666 pieces, Corset inexplicably appears as a small gray blob from Brief's penis and leaves with Stocking, telling the others that they are going to try and unlock another gate to Hell in the neighboring Oten City. They leave behind a trail of the pieces of Panty, telling Brief that if he wants a chance to get her back, he must follow them and help them unlock the gate.

Corset is able to use telekinesis, as shown when he manipulates Brief's body without touching it.

In battle, he can tighten his corset and buckles so tight that his muscles expand to grotesque size, becoming a monstrous hulking brute. He is also able to produce seemingly infinite amounts of bindings. He is able to attach Scanty and Kneesocks to his forearms and use their powers to produce Demonic swords and guns for his own use. In this form, he can easily overpower Garterbelt.

He attempted to fuse with the Ultimate Ghost he unleashed but was promptly destroyed despite that.

Like his counterpart Garterbelt, Corset may be immortal. But instead of regenerating immediately, he had to respawn from Brief's penis in a vastly less powerful form. 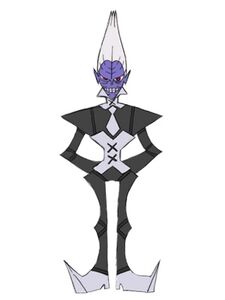 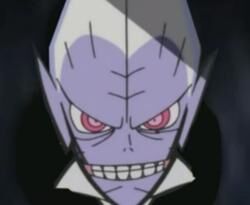