He is a high-ranking member of the Black Order who (alongside Ebony Maw, Cull Obsidian, and Proxima Midnight) assists Thanos in his quest to collect the Infinity Stones.

He was portrayed by Michael James Shaw.

Corvus Glaive and his brother Cull Obsidian were adopted and raised by Thanos, after he murdered half of their world. He became a loyal servant of the Mad Titant and was trained to become a skilled warrior. He also fell in love with his adopted sibling Proxima Midnight and married her.

Glaive was first seen raiding the Asgardians' ship following the destruction of Asgard by Surtur. When the defeated Hulk is sent back to Earth by Heimdall (who ends up being killed by Thanos), Glaive helps his siblings in forcing Loki to surrender the Space Stone (the Tesseract) to Thanos. It is also revealed that Glaive was involved of his father's attack on the planet Xandar to gain possession of the Power Stone (the Orb), which the Mad Titant used to destroy Xandar. After Thanos kills Loki, Glaive escaped with his family as Thanos uses the Orb to destroy the Asgardians' ship, leaving a helpless Thor to drift in space.

With two of the Infinity Stones in place, Thanos sends the Black Order to Earth to collect the Time Stone (the Eye of Agamotto) and the Mind Stone while he personally travels to Knowhere to collect the Reality Stone (the Aether) from the Collector and Vormir to collect the Soul Stone from the Red Skull. Assigned to collect the Mind Stone, Glaive and Proxima tracked down its location in Scotland, where they spot Vision (the current holder of the Mind Stone) and Scarlet Witch. Both Glaive and Proxima attempt to ambush the two, but the arrival of Captain America, Black Widow and Falcon forced the two to escape back into space. The Avengers then send Vision out to Wakanda, in hopes that they could use its technology to safely remove the Mind Stone and destroy it with Scarlet Witch's powers.

After collecting the Aether and the Soul Stone, Thanos heads over to Titan, where he defeated several Avengers and Guardians to get the Time Stone (the Eye of Agamotto). Around the same time, he sends Proxima, Corvus, and Obsidian to Wakanda, ordering them to lead a massive army of Outriders to attack the country and obtain the Mind Stone at all costs. This forces several Avengers and Wakandan warriors to fight back against the massive army. During the battle, Glaive infiltrated into the Wakandan palace after defeating Shuri and Ayo before engaging into a fight against Vision and then Captain America, assuring to Vision that he will die an ordinary man. However, after taking his weapon, Vision kills Glaive by stabbing him from behind, just as soon as the rest of his siblings and the Outriders end up being killed as well (thanks to the arrival of a returning Thor, Rocket Racoon, and Groot with a new powerful weapon called Stormbreaker).

Despite the massive losses, Glaive's prediction became true when an arriving Thanos managed to obtain the Mind Stone while killing Vision at the same time. Even when Thor used Stormbreaker to violently strike Thanos in the chest, Thanos used all of the Infinity Stones to wipe out half of the universe's populace (including several Avengers and Guardians) before escaping away, taunting Thor that he should've aimed for the head instead.

Five years after Thanos' destruction of half of all life, the remaining Avengers and Guardians use the properties of the Quantum Realm to travel back to different points in time to collect the Infinity Stones and use them to undo Thanos' actions; however, due to the sensors of Nebula's past and future selves interfering, the Thanos of 2014 ends up learning of the Avenger's plans and that they had killed him in their time. Knowing this, Thanos decides to use the Stones to wipe out all life and create a new universe, and has 2014 Nebula impersonate her future counterpart and bring his ship and all of his forces, Glaive included, to the future.

After bombing the Avenger's headquarters and defeating Thor, Iron Man and Captain America, Thanos unleashes all of his minions upon the earth to overrun his enemies and destroy the planet, Glaive and the other Children of Thanos, along with the Chitauri and Outriders, among them. However, they are opposed by an army of the Avengers' revived allies, who battle Glaive and the others as they try to get their hands on the Infinity Gauntlet. During the battle, Thanos is overcome by Scarlet Witch and orders Glaive to have their ship bomb the battlefield, which he does; though this attempt to destroy the heroes fails when Captain Marvel arrives and destroys the ship. Glaive is then wounded by Okoye shortly afterwards, and is later killed along with the rest of Thanos' forces when Iron Man sacrifices himself in using the Gauntlet to destroy them and Thanos. In his final moments, Corvus can be seen being cradled in Proxima's arms, with husband and wife spending their last moments together before they are erased from existence. 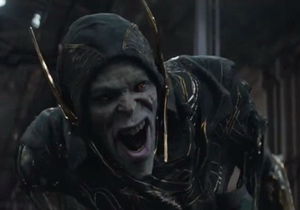 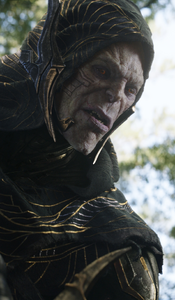 Corvus with his wife and adoptive siblings, hearing Thanos' speech. 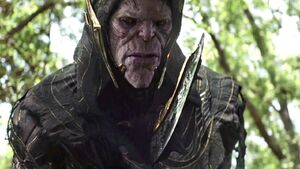 Corvus killed by Vision with his own glaive.

"But sire, our troopers!"

2014 Corvus and Proxima dying before turning into dust. 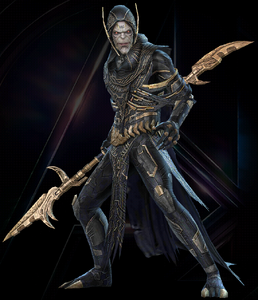