Frame Alison for her crimes (succeeded).

Cory Foster is the main antagonist of Cheerleader Camp.

To avoid detection, she is unusually friendly and demonstrative to all of the campers, despite them almost constantly ridiculing her because she isn't a "real cheerleader", she's just the mascot. This makes her exceptional and guiltless betrayal at the end of the film more disturbing.

She was portrayed by Lucinda Dickey.

Cory attends the summer camp Camp Hurrah, a remote area for cheerleaders and mascots, where she is often ridiculed by the cheerleaders. Soon enough, protagonist cheerleader Alison arrives at the camp and is put into a team by Miss Tipton. At the camp, she is roomed with Cory while Alison's boyfriend Brent immediately begins flirting with a blonde cheerleader named Suzy, much to Alison's chagrin.

That night, Cory slits Suzy's wrists and makes it look like a suicide; the viewers are unaware of the killer's identity at this point. The next day, Alison goes into the kitchen walk-in refrigerator in search of drink and discovers Suzy's corpse on a shelf, apparently hid by Miss Tipton to avoid bad publicity toward the camp. The police are called, and Tipton explains to Sheriff Poucher that in order to protect her job, she didn't want to report Suzy's death until the program was finished. The Sheriff assures her that he will take care of the matter, and the deal is sealed by the pair having sex, an act which is caught on video by a member of Alison's team named Timmy. As the result of a prank, the sex tape is broadcast the next day instead of a video of the camp's cheer routines.

Later, Brent has begun to flirt with teammate Pam, making Alison more frustrated due to the discovery of Suzy's body. At the river the next day, Brent and Pam leave to have sex. They argue, however, and he leaves Pam in the woods where Cory (still hidden from the viewer's point of view) impales her mouth with garden shears. That evening, Alison has a dream in which she kills Pam. The next day at the competition, Alison worries that she may have hurt Pam in a fit of rage and not remembered it. She mentions this to Cory who assures her that she slept through the night.

It is now the day of the competition and Pam is nowhere to be found. Cory competes in the mascot dance contest, but is denied the win by Tipton, who intends to make Cory look bad; unbeknownst to the viewers, Cory prepares to murder her as revenge for making her lose. The team improvises another cheer routine because Pam hasn't returned. During the new routine, Tim falls offstage, knocking the custodian Pop to the ground in the process. In a red herring, Mister Pop angrily cites him to die, leading the viewers to believe he is the killer. During the Camp Queen competition, Theresa, who has become increasingly worried about Pam, leaves to find her. Cory and Brent follow separately into the woods to look for Pam and Theresa, and Miss Tipton sends Pop to search for them as well. However, Theresa finds Pam's body in the woods and is chased down by Cory in a van, and smashes her against a tree; the van's headlights hides Cory's face from the viewers. After this, Cory tampers with her team's car to make it unusable.

In the meantime, Alison and Bonnie compete for title of Queen, which Bonnie wins. Timmy has managed to impress a cheerleader from another team and takes her outside to have sex with her, but finds Theresa's body. Brent announces at the party that there is a killer on the loose, causing the cheerleaders to panic and flee in their cars. Tipton stumbles drunkenly into the woods to search for Pam, but Cory (still hidden from view) slams a meat cleaver into her back. Alison, Cory, Bonnie, Tim, and Brent try to drive away, only to discover that their car has been tampered with, rendering it useless.

Meanwhile, Pop arms himself with a shotgun and fires into the air. The four hear the gunshots and run separate directions. Alison returns to the van and regroups with Brent, Bonnie, and Cory, who claims someone attacked her in the woods. Brent retrieves Timmy's video camera in the woods, where they watch Timmy's intestines being spilled out on tape. The four set a booby trap using a bear trap in the tool shed, which inadvertently kills the Sheriff. They then encounter Pop, armed with a shotgun; Cory shoots him with a revolver (her first kill in which the viewers know she committed) and says she thought he was the killer.

Back at the camp, Cory and Bonnie go to call the police, leaving Brent alone with Alison. He attempts to have sex with her, but she resists. Cory stumbles in, saying she can't find Bonnie, so Brent goes to look for her and Cory tells Alison she thinks Brent may be the killer. However, unknown that Cory had strangled Bonnie off-screen with a telephone cord. Armed with the revolver, Cory sends Alison to shoot Brent. They find him standing over Bonnie's corpse and Alison shoots him, believing him to be the murderer. When the police arrive, they charge a distraught Allison with the murders. Soon to the viewers, it is revealed that Cory is the killer as she supports the claim that Alison would have done anything to be number one. In the ambulance, Alison insists she only killed Brent, but the detective says that Cory blamed all the murders on her. Alison screams as she is taken away while Cory, in a cheerleader outfit, cheers in front of the camp in the as the sun rises. 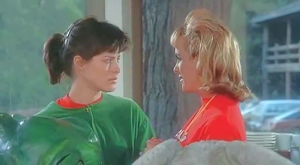 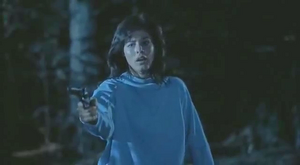 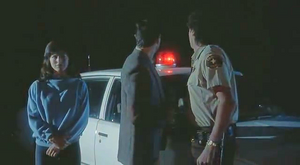 Cory pins the murders on Alison.
Add a photo to this gallery

Retrieved from "https://villains.fandom.com/wiki/Cory_Foster?oldid=4276011"
Community content is available under CC-BY-SA unless otherwise noted.