Get Lord Boxman to not Attack Turbo Lakewood Plaza for one day (succeeded).
Devour as many planets through the galaxy to satisfy her hunger.

Cosma, or Ms. Cosma, is a supporting antagonist and bigger bad in OK K.O.! Let's be Heroes. She is an investor of Boxmore Inc. and a business partner of Lord Boxman.

She is voiced by Marina Sirtis, who also portrayed Demona and Queen Bee in Young Justice, Mary Ann Eagin and Detective Inspector Walker in Gadgetman. In "Deep Space Vacation" she was voiced by Betsy Zajko

In "Stop Attacking the Plaza", Cosma, along with Vormulax and Billiam Milliam, attend a meeting with Lord Boxman. As Boxman tries to run out to destroy the Plaza, Cosma snaps and berates him for constantly abandoning his job to attack "a bunch of kids across the street". Cosma then tells Boxman that his production sales are dropping and that, if he doesn't keep focus and get business back on track, she and the other investors will fire him. When Boxman points out that, as his investors, they can't technically fire him, Cosma states that they will stop investing in his company, meaning that it will go out of business. Cosma then challenges Boxman to not attack the Plaza for an entire day before leaving.

After his investors leave, Boxman states that Cosma should've given him a harder challenge, only to slowly realize that he has an obsession with attacking the Plaza. At the end of the episode, Cosma congratulates Boxman for (technically) not attacking the Plaza all day and decides to continue funding his company.

Cosma appears in the episode "Villains' Night Out" where she's invited to attend a party being held by Billiam Milliom. There, she's with other villains such as Vormulax and other villains. There, she runs into Lord Boxman and is instantly annoyed at his presence and tries avoiding him at all costs due to the reputation he has among the other villains. As the night progresses, she finds herself almost vomitting from Boxman's bad singing and blows up the Moon to showcase her true powers. She later escapes along with most villains after P.O.I.N.T. Headquarters is attacked by Boxman in an attempt to impress Professor Venomous and fires upon the yacht nearly destroying it. She gets away while the remainder of the yacht is abandoned. The yacht is later destroyed by Boxman when he and Venomous escape.

In "You're in Control", Cosma is seen along with Billiam Milliom and Vormulax having a voice call with Boxman. She and the investors are pleased that Boxman's productivity has risen since the plaza hasn't been attacked wasting efforts. Once the call is over however, Boxman reveals he's planning a surprise attack with his most recent creation. Following Boxman Jr.'s death, Lord Boxman mourns his death along with the rest of the Boxman family. Then Darrell (dressed as sailor) comes in the room and turns the lights on, making Boxman threaten him with sending him to the furnace. Darrell gleefully says Boxman has a call to attend from someone.

When the screen appears, a furious Cosma appears yelling at Boxman. He nervously says that Boxmore is still working fine. But Cosma says it was working fine until the mass destruction caused by Boxman Jr. and T.K.O. during their fight, blaming him for the creation of the former as she proceeds to tell Boxman that he is fired by breathing fire through the screen at him. Boxman says he doesn't need the job anyway, but Cosma mentions she also meant getting fired from a cannon into the sun. Afterwards, the Boxman family wonder who their new "daddy" would be. Cosma says there's no need to worry, as she presents Darrell as the new CEO of Boxmore, having shown great loyalty to the brand.

In "Lord Cowboy Darrell", Cosma makes a cameo in the newspaper's front page along with Darrell after Boxmore's sales increased under his leadership, following the events of "You're in Control".

Lord Boxman is found by Professor Venomous in trash bin outside his house after getting fired from Boxmore and decides to let him stay on his house feeling pity for him. Later, Venomous contacts Cosma and the investors in a video call regarding the recent amount of technos he got from threatening the Congress Woman with his doomsday ray. Cosma asks Venomous in what they should invest all that amount of technos. Venomous talks about the idea of investing in more weapons, and says he can threaten Congress Woman again into giving him even more, but Cosma believes it's way too risky to do such thing twice.

Cosma is last seen with the investors when Venomous buys Boxmore with the capital as a token of his gratitude to Boxman for reminding him of why he became a villain in the first place.

Cosma is a tall, reptilian creature with orange scales and large, prominent yellow eyes and a short snout. She also has medium-length tawny hair and two spikes on either side of her head protruding from beneath her hair. Her outfit consists of a sky-blue bodysuit with a slightly darker center wrapping around her waist. She also has a set of cerulean gloves, boots, and shoulder-pads of the same color. In her giant form, Cosma is a lot more muscular and has longer horns, hair and tail. For some reason, she doesn't wear her boots although she keeps wearing her gloves. Her voice has also a slight echo. When she is tiny she has a high pitched voice.

Cosma is a no-nonsense type of woman who puts business ahead of all else. She finds herself impatient and annoyed with Boxman and his constant attacks against Lakewood Plaza and its heroes and views it as a useless waste of time that's costing money. She threatens Boxman with financial punishments in exchange for his cooperation and seeks to only further her business. Being a supervillain, Cosma hates heroes and seeks to destroy all of them, but lacks the passion and devotion that Boxman has when dealing with the plaza and its heroes. 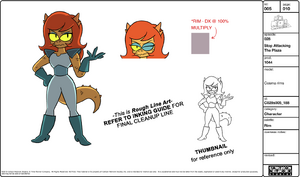 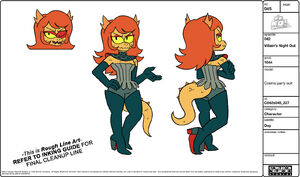 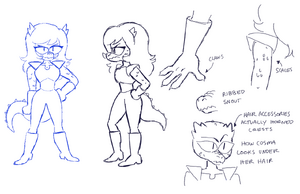 A concept art of Cosma revealing that her hair is actually a wig. 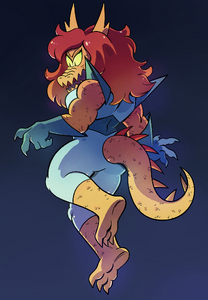 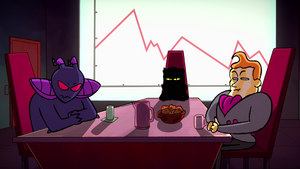 Cosma with Boxman's other investors. 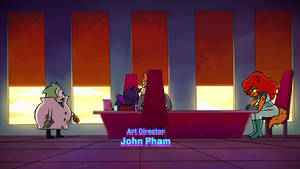 Cosma and the investors stare angrily at Boxman. 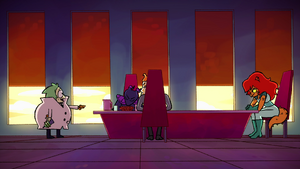 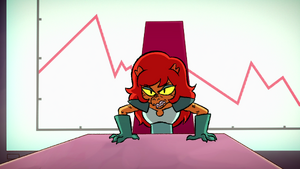 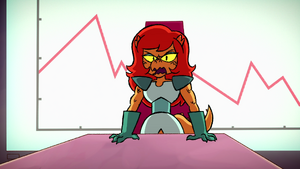 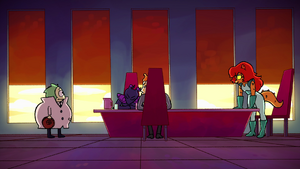 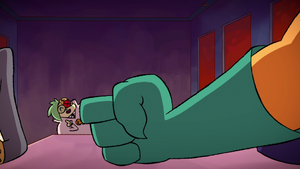 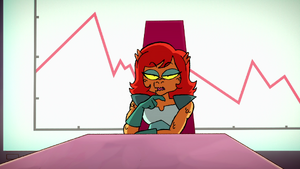 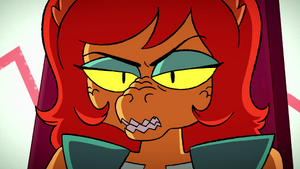 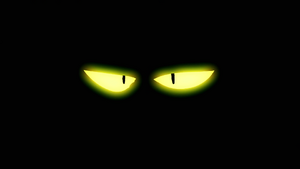 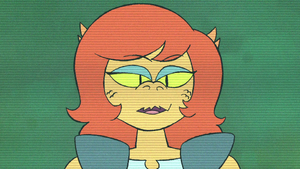 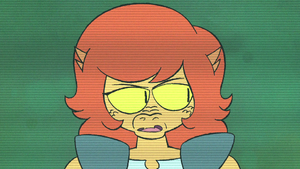 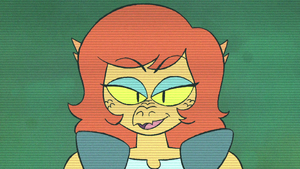 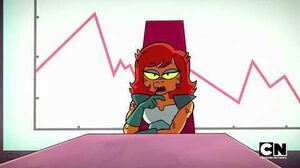 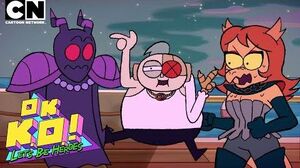 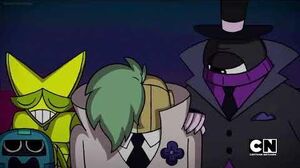 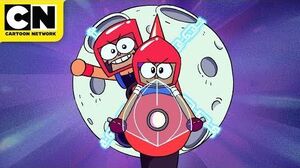 KO and Enid's Trip to Space O.K. KO! Let's Be Heroes Cartoon Network
Add a photo to this gallery

Retrieved from "https://villains.fandom.com/wiki/Cosma?oldid=3503873"
Community content is available under CC-BY-SA unless otherwise noted.