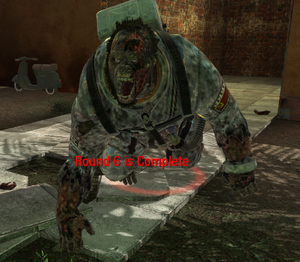 The Cosmic Silverback is the boss monster in the “Dead Ops Arcade” minigame of ‘’Call of Duty: Black Ops’’. He is a giant zombie gorilla in a Soviet space suit. Throughout the game, the Cosmic Silverback appears after completing certain rounds to steal the leftover treasure on the screen, and is fought as the final boss on Round 40, only to reappear immediately afterward and punch the player back to Round 1. On the Game Over screen, he appears to steal all the player’s treasure. The description for ‘’Dead Ops Arcade’’ on the game’s menu screen implies that the Cosmic Silverback is the leader of all the zombies appearing in the mode.

Retrieved from "https://villains.fandom.com/wiki/Cosmic_Silverback?oldid=3396356"
Community content is available under CC-BY-SA unless otherwise noted.