Singing to her opponents while killing.

Spread chaos throughout the Empire.

Cosmina is a supporting antagonist from the manga and anime Akame ga Kill!.

She is one of the members of the Empire's Secret Police Force, called Wild Hunt.

Prior the series started, Cosmina used to lived in the Western Country and can manipulate people with her voice, but because of that, she branded by the people of the town and being called a witch. This also led her family's house set on fire and killing them. Cosmina was the only survivor of her family, and her loss and trauma driven her into insanity.

In chapter 44, Cosmina is seen with the other Wild Hunt members at the coliseum. She displayed her Teigu's power, which produced devastating, bone-shattering sound waves.

She is later seen with the others investigating the Umatora Theater, she gladly took part in mass rape, taking all "pretty boys." She was present during all other affairs of her group.

Later, as Run visited the Wild Hunt HQ, she greeted and flirted with him; however, after Run lured out Champ with the intent to avenge his students' death, Cosmina and Enshin followed them in suspicion.

While the two followed Run and Champ, she and Enshin were intercepted by Kurome and her corpse puppets. Cosmina used her Teigu's maximum power to destroy the beast puppets. After Run was fatally injured by Champ's attack, Cosmina attempts to rape Run, but she was shot in the back by Mine from a distance.

While Cosmina was close to death, Dorothea picked up and put her in a cryogenic tube at the established workshop in the Capital. However, she received permanent brain damage due to being left in a near-death state for a prolonged time. She later mutated into a monstrous creature.

She, Dorothea and Izou attacked one of Revolutionary Army's outpost, slaughtering and consuming a large amount of soldiers. After she murder the soldiers, she was then cut by Akame's attack. But she can recovered thanks to the philosopher's Stone embedded in her chest. She was later confronted and killed by Tatsumi in bifurcation.

Cosmina is a young woman with an pink bob-style haircut and wearing black bunny ears as a accessory on her head. She also wore a mini dress that was also pink, she also wore a pink collar and matching pink wristbands, black leggings, pink boots and a pair of glasses. Before to her introduction, Cosmina wore a red hooded jacket.

In her Danger Beast form, Cosmina has a very large body with multiple spider-like legs, while her upper body resembles that of a mantis. She retained her hairstyle and a human-like face, but with sharp teeth in her mouth and a pair of antennae on her head. She also has a philosopher's stone embedded in her chest.

Cosmina was cheerful, caring, Sadistic, remorseless, perverted and mentally unstable during her appearances. She loved putting a show on to her opponents while killing them. and striking stage-like poses with a cheerful smile and showing no remorse for her actions. Despite her sadist side, she has shown to genuinely care to her comrades of the Wild Hunt, and when she didn't attack Izou and Dorothea even after her transformation into a monster. 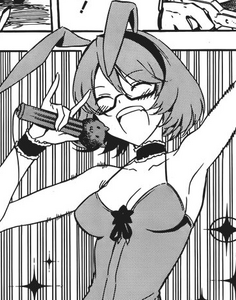 Cosmina in her normal appearance. 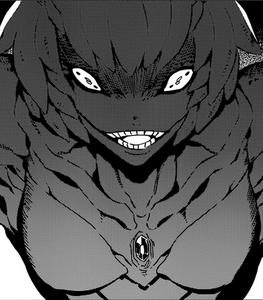 Cosmina in her beast appearance. 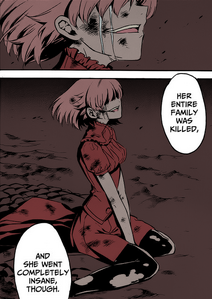 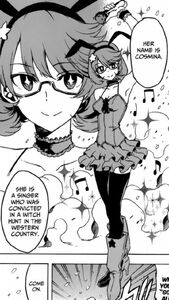 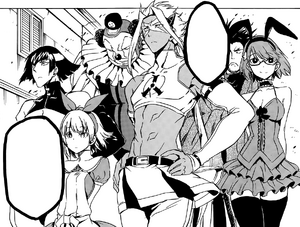 Cosmina with the other Wild Hunt members. 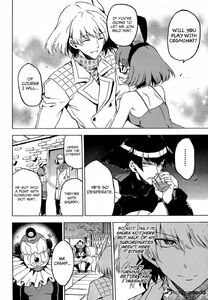 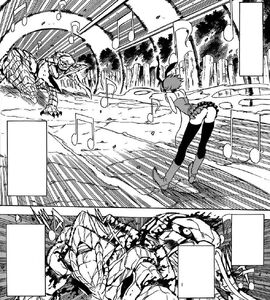 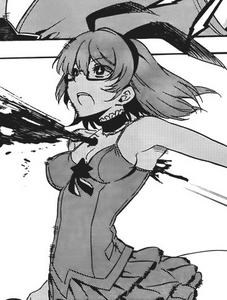 Cosmina shot in the back by Mine. 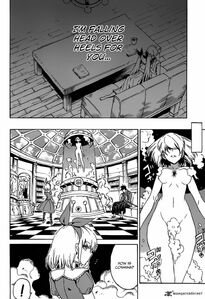 Cosmina in the cryogenic tube. 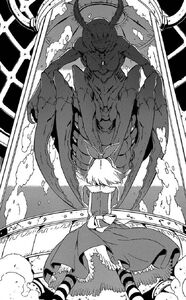 Cosmina's death.
Add a photo to this gallery

Retrieved from "https://villains.fandom.com/wiki/Cosmina?oldid=4093406"
Community content is available under CC-BY-SA unless otherwise noted.