Kill every rabbit on Earth

Genocidal Minion
Cottontail Smith is a minor antagonist in the Looney Tunes franchise. He is a Texas hunter who planned to hunt down every rabbit that exists on the planet. He was also one of Yosemite Sam's henchmen in Looney Tunes: Back in Action.

He was the main antagonist of "Super-Rabbit" and a supporting antagonist in Looney Tunes: Back in Action.

He was voiced by the late Mel Blanc in "Super-Rabbit" and Danny Chambers in Looney Tunes: Back in Action.

Smith appeared in Super-Rabbit where he rides on a horse and attempted to shoot Super-Rabbit, but the bullets turn out to be useless. Bugs Bunny shoves Smith and the horse onto a bench seat, and then flies into the sky. Smith chases Bugs on his own airplane until Bugs destroyed it. Eventually Bugs ran out of power, and later left Smith instead of fighting him because he thinks the job should be for a real superman. This was his only appearance in a cartoon episode.

Despite only appearing in one cartoon, Smith later returned in Looney Tunes: Back in Action where he, along with Yosemite Sam and Nasty Canasta teamed up where they try and plan to obtain the map to the Blue Monkey Diamond from D.J. Drake.

He never appeared in any future Looney Tunes content again. Unlike most characters, Cottontail Smith only appeared twice in the Looney Tunes franchise. 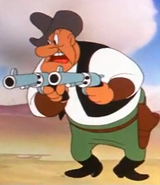