Protect one another from their enemies across the Multiverse.

The Council of Ricks is the overarching antagonistic faction of the adult-animated TV series Rick and Morty. It is an inter-dimensional organization comprised of millions of Ricks and Mortys across dimensions who united to protect one another from their enemies across the Multiverse.

C-137 Rick Sanchez was significant in the creation of the Citadel and was offered a spot on their ruling body but refused, finding it hypocritical that Ricks would form a government to hide from the government, prompting the council to deem him a rogue.

They first appear as minor characters in "Close Rick-counters of the Rick Kind", and later as the secondary antagonists of "The Rickshank Redemption".

The Council of Ricks was formed by C-137 Rick during his quest to find the Rick who murdered his wife and daughter, in conjunction with several other Ricks. A dispute arose between C-137 Rick and the other Ricks, leading the former to resign from the council and go rogue.

They first appeared to arrest C-137 Rick after he was framed by Evil Rick for his Rick killing and Morty kidnapping spree. However, Rick managed to escape and began looking for the real culprit to prove his innocence. Several Ricks working for the council then took up refuge in C-137 Rick's house in case he returned or tried to phone home.

The Council of Ricks later appears in "The Rickshank Redemption", where they take C-137 Morty and Summer to the Citadel after their portal gun was damaged. Upon learning that C-137 Rick was taken hostage by the Galactic Federation, the Council sent SEAL Team Ricks to assassinate him before he could give up their secrets. C-137 Rick managed to evade being killed as well as escape the Federation's clutches before heading to the Citadel of Ricks to rescue his Morty and Summer.

Rick used the Federation's mind-reading device to swap minds with a Rick Military officer. With his new position, Rick teleported the Citadel of Ricks to the middle of the Galactic Federation's prison, giving him the diversion he needed to rescue Morty and Summer. Rick then swapped minds with Rick Prime and killed all of the members of the Council save Riq IV before transferring his consciousness to the body of another Rick.

Riq IV then took Summer hostage to prevent Rick from killing him. However, Rick had Morty shoot him instead so he could fool Riq IV, giving him the opportunity he needed to kill the council leader.

Following the death of the Council of Ricks, the Citadel was reorganized into a democracy, though this turns out to be a ploy by the Shadow Council of Ricks, who were secretly running the council the whole time. However, after Evil Morty gets elected, he kills everyone in the Shadow Council, with the exception of two members, and becomes de facto ruler of the Citadel.

It is revealed the Citadel manipulate events to get Beth's and Jerry's together so they will eventually have Morty. They then clone the Mortys and sell them to Ricks to be subservient sidekicks.

Evil Morty rebuilds the Citadel making it appear nicer to its residents however, he secretly organizes a shuttle to be built so he can break and escape the central finite curve. After downloading all the contents of Rick C-137 mind he gets all the information he needs and hacks the citadel's portal supply and operation Phoenix program killing Rick's and Morty's. He uses his shuttle to escape and blows up the Citadel. Rick and Morty escape detaching a section of the Citadel 'Mortyburg'. 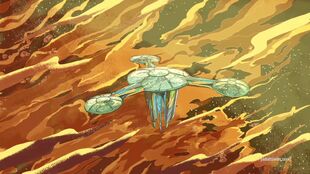 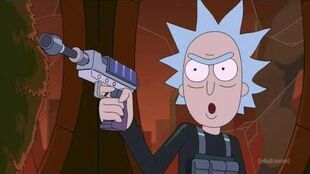