Once a laughing stock among the Grineer leadership, Vay Hek has killed and threatened his way to becoming the highest-ranking individual in the empire, answering only to the Queens themselves, the supreme rulers of all Grineer. With murderous hatred of everything that isn't Grineer, Vay Hek leads the empire's forces to spread their might throughout the Origin System.

Vay Hek serves as the primary antagonist for the Saya's Vigil and The Archwing quests and most Grineer-related events in the game, including Sling-Stone, The Cicero Crisis, Thethra's Doom, Gate Crash, Eyes of Blight and Plague Star.

He is voiced by James Atkins.

Due to his mutilation, Councilor Vay Hek was reconstructed with extensive body modification. Only his face has any visible flesh left and is attached via an elongated neck to a heavily-armored yellow mechanical suit, which allows him to fly and attach himself into a large Terra Frame armor should he need a significant increase in firepower. His cyborg body also includes two machine guns and an armored face-mask to protect his head in combat situations.

His Terra Frame is a massive, bird-like exoskeleton. Despite its size and weight, the Terra Frame is surprisingly agile and armed with a Drone launcher on its left and a large rocket launcher shaped like the Hek shotgun on its right.

Councilor Vay Hek's grotesque appearance and hatred for all non-Grineer are only matched by his near non-existent temper and the volume of his voice. Vay Hek has no patience for failure or anything in general and his first, second and third solution to any problem is violence, and he delights in it.

Vay Hek started his career as a lowly councilor and was disrespected by the rest of the Grineer leadership. Determined to prove his worth to his queens, Hek worked together with the brilliant Doctor Tengus to turn his vision of Ghouls, rapidly-developing soldiers that could be launched in bags from orbit onto a target world and conquer it without the need for reinforcements or support, into a reality.

Despite initial mockery and small mistakes due to the young councilor's nervosity, Vay Heks demonstration seemed to be going well and the queens appeared to take a liking to his idea. However, during the grand unveiling of the Ghouls, Dr. Tengus betrayed Hek and kicked him into the Ghoul enclosure, which began to eat him alive and tear him apart in their near-mindless and animalistic ferocity. Impressed with the display, the queens approved the Ghoul project and the Elder Queen ordered Tengus to reconstruct the "funny man".

When Hek awakened after being rebuilt, he was pleased that he has finally become as magnificent as he was always meant to be, choking the doctor and declaring everything else to be "maggots". He would ultimately let Tengus live to serve as his subordinate.

While the Grineer occupy almost the entirety of Earth, a small town by the name of Cetus continues to elude their grasp thanks to a nearby Orokin tower. The mysterious artificial intelligence called the "Unum" that controls the tower's defense mechanisms protects the humble Ostron people living in its shadow and guides their harvest of its renewable resources for food and construction material, and is revered and worshipped by them as a result. Unwilling to let them live in peace and wanting to claim the tower for the Grineer, Cetus is under constant threat from Hek's attempts to bypass the Unum's protective barrier.

During his attempts to bypass the Unum's defenses, the councilor hears of a local legend describing the victory of a single Tenno's victory over a colossal Sentient that attacked the Unum during the Old War. According to the legend, the Tenno used a powerful bomb created by the Unum in a last ditch effort to stop the Sentient from taking control of the tower by shattering its heart, the Sentient's remains now scattered across the Plains of Eidolon outside of Cetus. Vay Hek believed the secret to this power could still be buried somewhere on the Plains of Eidolon. His excavations eventually bore fruit, as his troops discovered an Ostron coffer sealed with a "Shatter Lock", which can only be opened by assembling a special glass key, else risking the destruction of its contents. However, the Tenno took the coffer away before it could be delivered to him.

At the same time, Ostron chief Konzu asked the Tenno for help in investigating the disappearance of Onkko five years ago, who was a close friend of his along with his concerned wife Saya. Konzu seemed convinced that opening the coffer could be vital to finding him. One by one the Tenno stole the glass key pieces Hek had managed to obtain, even attacking his personal Galleon ship much to Hek's increasing bewilderment. When the Tenno found the location of the final piece, Hek ordered his troops to intercept, but was distracted by the appearance of an Eidolon Teralyst, a large piece of the dead Sentient that awakens and roams the Plains at night. While Hek's forces attacked the Teralyst, the Tenno used this opportunity to claim the last key piece and escape.

With all Shatter Lock pieces collected the Tenno opened the coffer, which contained an iron flower, a gift Konzu had given to Saya long ago. Saya finally accepts that her husband is gone and rekindles her love with Konzu. Since the flower was all that was inside the coffer, Vay Hek's efforts were doomed from the start.

When an Infested comet crashed onto the Plains of Eidolon and began to swarm the surrounding landscape with Infested creatures, Vay Hek ordered his troups to protect the boil, intent on allowing the malformed monstrosities to overrun the Ostrons. Once Cetus has been destroyed, he would use a toxin to kill the boil and the Infested, leaving the Grineer victorious. Konzu once again asked the Tenno for aid, who stole Hek's toxin and used it to kill the boil before the Infested's numbers grew too large. Despite heavy resistance from both Hek's forces and the boil itself, the Tenno succeeded in destroying it and put a stop to the councilor's plans. The boil couldn't be killed permanently however, and occasionally resurfaces to threaten Cetus once again.

Numerous events in the game dealt with the threat of Vay Hek's fleet of Balor Fomorian class capital ships, the largest and most powerful ships the Grineer have to offer, capable of destroying space stations such as the Tenno Relays in a single shot.

After judging the prices they pay for the Corpus' products to be too high, the Grineer Queens threatened the Corpus Board with these newly developed superweapons. Head of Grinner relations Alad V dismissed the threat and advised the Corpus Board to increase the prices instead as mockery of what he believed to be an imaginary fleet. While the attack would have dealt a devastating blow to the equally dangerous Corpus, The Lotus couldn't allow the Grineer to gain such a significant advantage and sent the Tenno to sabotage the fleet's reactor cores.

The Lotus later discovered "Project Tethra", a massive construction project by Vay Hek to rebuild his crippled Fomorian fleet. The Tenno were instructed to intercept Grineer transmissions and find the locations of the reactor cores being built on the Grineer shipyards on Ceres, so they can steal the cores fresh off the production lines and safely detonate them in the vacuum of space.

Many cores were destroyed and the production of Balor Fomorians slowed down, but Project Tethra was ultimately successful enough. The Lotus feared they might not have the means to destroy the second Fomorian fleet. The Tenno had to secure ancient Orokin data the Corpus found detailing the hidden locations of Archwing parts, mechanical wings which allow its users to manouver and survive in deep space, along with some heavy weaponry. Once the first Archwings had been constructed, Lotus sent a squad of Tenno to a Corpus scout ship with information on the location of the Fomorian fleet. However, while infiltrating the ship Vay Hek publicly addressed Chairman Frohd Bek and declared all-out war on the Corpus. As the ship was bombarded by a Fomorian and stormed by Grineer soldiers, the Tenno tried to extract from the ship, but the damage forced them to equip their Archwings and look for an alternative extraction point while dodging the Fomorian's heavy weaponry. They barely managed to escape and concentrated their efforts on preparing for what came next.

Hek sent his fleet out to destroy the recently constructed Tenno community relays in the Origin System. Some relays were lost, but thanks to the decreased number of Fomorian ships Hek's fleet was eventually exhausted, securing victory for the Tenno. The Queens reprimanded Hek for his failure and waste of resources.

Between the destruction of the first Fomorian fleet and Project Tethra, Hek decided to make a move against the overgrown forests of Earth. He had his scientists engineer the "Cicero Toxin", exploiting a chemical weakness common to 90% of local plant life, so that they could wilt the vegetation away and make room for Grineer settlements and outposts, also gaining access to underground resources in the process. The Tenno used various plants from these very same forests to develop an anti-toxin and sabotaged Hek's toxin injectors, foiling his plans.

After finally tracking down the Vay Hek's location to an outpost on Earth, the Tenno were able to attack him directly in an attempt to assassinate him and finally end his threat. After chasing Hek through the jungle and pushing through the forces he sent in their way, the Tenno were eventually able to corner him. Refusing to go down without a fight, Hek attached himself to his Terra Frame and faced the Tenno himself. While the Tenno were able to severly wound him, Vay Hek managed to dislodge himself from the destroyed Terra Frame at the last possible moment and escape with his life. 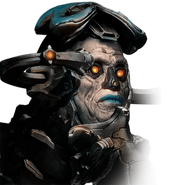 A young Vay Hek and Doctor Tengus in the Ascension comic.

Vay Hek being torn apart and eaten by his own Ghouls, leading to his reconstruction.

A promotional image for the Sling-Stone event.

A promotional image for the Cicero Crisis event.

A promotional image for the Tethra's Doom event.

A promotional image for the Gate Crash event.

A promotional image for the Eyes of Blight event.
Add a photo to this gallery

Retrieved from "https://villains.fandom.com/wiki/Councilor_Vay_Hek?oldid=4145072"
Community content is available under CC-BY-SA unless otherwise noted.