Requiring a link with Zalkor to sustain

tormenting those under his command.

Count Abyss was a Marvel comics supervillain and an enemy of Adam Warlock and the Infinity Watch: he was immensely powerful due to a special link he had with a strange demonic being.

Milos Abyss was once a member of a band of scientists, though he had long ago tired of his position and salary as an imperial researcher. Having hear the ancient Zalgodian legend about the Zalkor, bestower of unlimited wishes, Abyss plotted to obtain this power himself, learning everything there was to know about the extinct Zalgodians.

Abyss was part of an archeological away team sent to examine a newly discovered derelict spacecraft of unknown origin. Only Abyss, with his extensive knowledge of the Zalgodians, was able to decipher the log of the centuries-old ghost ship. Unwilling to share this chance with his co-workers, Abyss slew them all, destroyed the ship, and followed the star chart to the satellite orbiting an unnamed crimson planet. With the Zalgodians long gone, Abyss explored the satellite, eventually encountering the mighty Zalkor. Knowing the Zalkor was addicted to, but unable to reach, the beat-metaphysic Skrimblatt, Abyss transacted the traditional bargain of legend, offering to give it the Skrimblatt in exchange for becoming the Zalkor's Kalorian. Abyss knew that the deal would cost him his soul, but accepted this loss as the Zalkor granted him vast power. Now Count Abyss, he was bonded to the Zalkor and used his new power to conquer his home dimension; world after world fell into submission, galaxy after galaxy paid homage to its new tyrant. Despite or perhaps because of the loss of his soul, Abyss proved to be an exceptionally vicious and merciless despot.

Count Abyss came upon Egolix-7, easily conquering it. To legitimize his claim, he took the teenage Maya as his consort. Count Abyss wiped out the resistance movement on Egolix-7, converting the survivors into monstrous servants. Maya served as Abyss' consort for approximately a decade. Though having been content without his soul for several decades, Abyss eventually began to deeply feel the loss of his spirit. With the entire universe conquered, there remained nothing to challenge him, and no satisfaction could be gained from food, woman, drink or anything else. But crave as he did for his lost soul, Abyss could not surrender the power of the Zalkor. Seeking to possess both, he studied for years.

From an obscure magical tome, Abyss learned of the existence and location of the Infinity Gems, in particular the Soul Gem. After three years of searching, Abyss located the Gems amongst the Infinity Watch on Earth. Abyss told Maya of the Gems, and of his particular interest in the Soul Gem. Eternity told Adam Warlock that he would soon face a man without a soul.

Abyss sent a group of his minions to Monster Island to assault the Infinity Watch. None of the Gems proved to have any effect on the minions, who threatened to overwhelm the Watch, until Adam Warlock correctly reasoned that the minions might be creations of a dead soul; he then used the Soul Gem to expose the minions to the cold light of truth, which proved to be their Achilles heel. After the minions fled back to Abyss, he appeared before the Watch, telling Warlock to give him the Soul Gem or risk his own life. Warlock refused, and Abyss told him that he would suffer for his decision.

Abyss visited the Zalkor and commanded that he give him what he sought. The Zalkor created a magical love potion for which there was no cure. Abyss bragged to Maya how he would use the love potion to gain the Soul Gem, instructing her that she, too, would take the potion in order to give Warlock a false sense of security.

Abyss instructed Maya about the antidote to the love potion she was to take, and he then sent her to Monster Island to institute his plan. However, shortly after her arrival, she was knocked unconscious by Hercules, who along with the rest of the Avengers was under control of the Man-Beast. Abyss was enraged to learn that Maya lay unconscious and had not been able to act out of his instructions as yet. However, she revived soon afterwards.

As Maya carried out Abyss' plot, he watched from a distance, amused by the fact that there actually was no antidote. Abyss sent his minions to Monster Island to assault the Infinity Watch and, during the distraction, Abyss himself appeared and abducted Maya back to his fortress. He knew Warlock would be unable to stop himself from traveling to his realm to try to free Maya, and he counted on this fact as his own powers would be superior to those of the Infinity Gems in his realm.

Using the Orb of Eternity, Adam Warlock learned of Count Abyss' origins, but incorrectly assumed Abyss intended to bargain Maya's return in exchange for the Soul Gem. Warlock intended to surprise Abyss by confronting him in his own dimension. Within Abyss' dimension, Warlock and the Infinity Watch joined forces with Darklore and Meer'lyn. Within the fortress, Maya attempted to kill herself so that Warlock would not risk himself for her, but Abyss easily stopped her. He then returned to the Zalkor, recharging his power so that he would be at his peak. One by one, Abyss overpowered each of the Watch, turning their own Gems' powers against them, as well as Darklore and Meer'ynn. Ultimately, Abyss wrested the Soul Gem from Warlock, intending to use it to know peace at last.

Abyss resisted the vampiric influence of the Soul Gem, making himself its master in short order. He briefly drew the residents of Soul World—including Kray-Tor, Autolycus, and likely the Black Knights of the Universal Church of Truth, Borgia, Egeus, Star Thief, and others—out of the Soul Gem, drinking of their souls. While Abyss was somewhat intoxicated from the experience, Meer'lyn retrieved a magical talisman which the heroes used to free themselves. Darklore, Meer'lynn, and Warlock then assaulted Abyss, retrieving the Soul Gem. Abyss smashed Darklore to the ground and attempted to reclaim the Gem, but Warlock transported the soul of Kray-Tor into Abyss. Now possessing the soul of a virtuous man, Abyss was assailed by the agonies of remorse for his many crimes. Abyss transported himself to the Zalkor, hoping to gain further power. However, as Abyss now possessed a soul, the Zalkor failed to recognize him as his Kalorian.

Warlock then attacked Abyss, whose soul prevented him from attacking with lethal force. As they struggled, Darklore used his magical talisman to open a portal to another realm many times removed from Abyss and the Zalkor's realm of influence. Warlock retrieved the soul of Kray-Tor, then cast Abyss through the portal, which Darklore swiftly closed. Lacking a source of power, Abyss had no way to return to his home dimension. Darklore restored to normal the people that Abyss had transformed into his monstrous servants, but he could not remove the heartache from Warlock and Maya, nor could he remove the anguish from Kray-Tor, who had been tainted by his brief union with Abyss.

His powers are whatever he wishes them to be. He is an omnipotent being. Nearly anything Abyss requested the Zalkor granted it. There was very little that his magic could not accomplish. Count Abyss is only omnipotent within his own dimension, which is the the Zalkor's sphere of reality. His power gradually fades should either one of them leave their dimension. He can fire energy blast from his hands, and shield himself from both scientific and magical attacks. He can cast illusions and open portals into other dimensions. Count Abyss can also exist in several locations simultaneously. His abilities allow him to transmute objects and entities into different forms. He can control and redirect the powers of others, and telepathically over whelm his opponents. He can practically do whatever he wants. However he requires periodic charges from the Zalkor to retain his power. 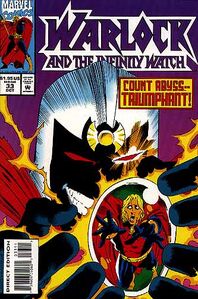 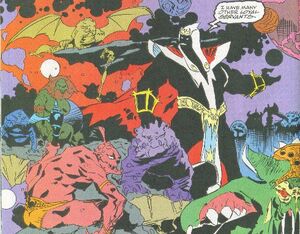