Destroy the society of America with a train loaded with bottles of nitro-glycerine.

Win the heart of Elena de la Vega (both failed).

Count Armand is the main antagonist of the 2005 film The Legend of Zorro.

He was portrayed by Rufus Sewell, who also portrays Agamemnon in Helen of Troy, Adam in Abraham Lincoln: Vampire Hunter, Crown Prince Leopold in The Illusionist, Urshu in Gods of Egypt, Count Adhemar in A Knight's Tale, John Smith in The Man in the High Castle, and Eric Stark in Bless the Child.

Armand is a wealthy French count who supposedly has a relationship with Alejandro de la Vega's wife, Elena, after she seemingly leaves him. She is in fact undercover and working for two Pinkerton agents who had discovered that Zorro is Alejandro, and had threatened to expose him if she did not cooperate.

Both Elena and Alejandro learn that Armand's ultimate scheme is to cause the United States of America to forever tear itself apart with the use of a train loaded with bottles of nitro-glycerine (a highly explosive liquid). Armand employs a rogue gunman named Jacob McGivens to obtain a land deed from the Cortezes, a family who are friends with Alejandro, in order to use their land to build a railroad.

During a meeting between Armand and McGivens, the count gives McGivens and his men three days to build the railroad or else he won't pay them, prompting McGivens to insult him. Armand instantly grabs him and threatens to cut out his tongue if he ever addresses him again in such a manner, then forces McGivens to leave.

Meanwhile, Elena keeps up her pretense that she is attracted to Armand and wishes to be his wife, much to Armand's delight, but he eventually discovers that she is spying on him and kills the two Pinkerton agents. Armand later lures Zorro to his train, which is already loaded with nitro-glycerine, and captures him. McGivens removes Zorro's mask and reveals him to be Zorro. Armand then orders McGivens to kill him while he takes Elena and her son Joaquin on board his train.

After a brief fight, Zorro manages to kill McGivens before chasing after Armand's train, subduing all of the count's guards before entering one of the carriages. Zorro finally confronts Armand and they engage in a fierce swordfight, which eventually leads to the very front of the train. Elena appears, after killing Ferroq, to help Alejandro and together they overpower Armand, hooking him to the front of the train by his collar before making their escape. Shortly after, the train comes to the end of the line and smashes into a buffer, crushing Armand to death and causing the bottles of nitro-glycerine on board to tip over and explode, destroying the train entirely. 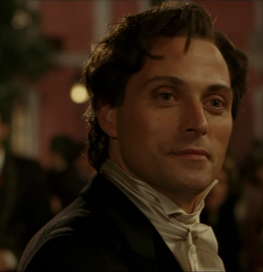 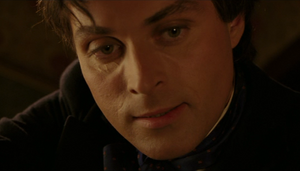 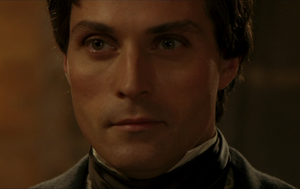 Armand revealing his intentions to annihilate the United States of America 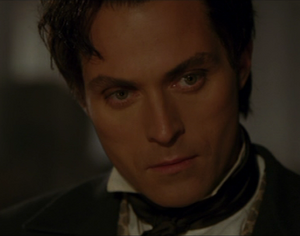 Armand about to become a train's buffer

Zorro fight Armand to front of the train