Enforcing the rules of his tribe.

Antagonizing his son and Timpani.
Attempting to destroy his son's love.

Keep order as it used to be and punish those who disrupt it.

Count Bleck's father (or Blumiere's father) is the main antagonist of the post-Chapter flashback storyline in the game Super Paper Mario. He is the authoritarian father of Lord Blumiere also known as Count Bleck, the protagonist turned central antagonist. Due to his actions and his role as the cause of his son's transformation to the nihilistic villain, Count Bleck's father is one of the people who are responsible for the entire game's plot events, alongside Dimentio. He is never named and only ever addressed as Father.

Lord Blumiere and his father were members of the Tribe of Darkness, a group that broke from the Tribe of Ancients after stealing the Dark Prognosticus to prevent its powers from being abused. His existence is first mentioned by his son when he tells a human girl named Timpani that he was late to see her because it was hard to sneak out of the castle after his father caught him. Upon discovering that his son fell in love with Timpani, Blumiere's father disapproved of it and attempted to destroy the bond several times because his tribe avoided mixing with other people out of pride and forbade marriage outside of the tribe to keep their magical powers from weakening. It is implied that he warned Timpani by threats to stay away from his tribe and break up with his son. However, his attempt to tear the lovers apart ultimately failed, as they eventually got engaged to each other.

Before she and Blumiere could fulfill the engagement, Timpani vanished. A heartbroken Blumiere confronted his father over her disappearance, only for the latter to tell him coldly that he banished Timpani from their home dimension and that he believed it was a fate that his kind must never mix with humans. Desperate, Blumiere stole the Dark Prognosticus, which his father begged him to stay away from. Renaming himself as Count Bleck, he destroyed his home dimension in revenge for his love, killing his father and wiping out his entire tribe in the process.

It is unclear what happened to his home dimension after it was destroyed, though if Sammer's Kingdom being restored when the Pure Hearts destroy the Chaos Heart is any indication, it is likely to be restored as well.

Lord Blumiere's father is far haughtier, sterner, stricter, crueler, colder, and more prejudiced than his kind-hearted son. He is an authoritarian figure who believes in keeping order as it used to be and has no empathy to those who disrupt it. He does whatever it takes to enforce the rules of his tribe. He seems to have a prejudice toward humans as he described Timpani as a "dirty" human who manipulated his son into defecting from his tribe regardless of the fact that she genuinely loved Blumiere without such a calculation.

The combination of his unreasonable obsession with keeping order as it used to be and prejudice toward humans stops him from considering the well-being of others, which has made him commit all of his atrocities, such as attempting to destroy the bond between his son and Timpani, banishing Timpani from her home dimension, and callously scolds his son for bringing disgrace on him and on his entire tribe; all of which he did without any signs of remorse or hesitation. His indifference to the well-being of others is eventually what indirectly causes his downfall as they caused him to miss the pain of losing a loved one. In the end, he is utterly shocked when his son showed him how vengeful he was for losing Timpani by destroying his home dimension. 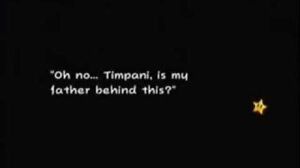 Blumiere & Timpani
Add a photo to this gallery

Retrieved from "https://villains.fandom.com/wiki/Count_Bleck%27s_Father?oldid=2602082"
Community content is available under CC-BY-SA unless otherwise noted.