Leader of his minions
Member of the Tribe of Darkness

Control of the Chaos Heart

Count Bleck (in Japanese: ノワール伯爵, Nowāru Hakushaku, translated as Count Noir), true name Lord Blumiere, is the central antagonist of the 2007 Nintendo Wii video game Super Paper Mario. He is a mysterious figure who wanted to end all worlds with the power of the Chaos Heart by summoning the Void supposedly so he can create new worlds in their place, when in fact he intends to keep them in ruin. He leads a group of evil-doers that includes Nastasia, Mimi, O'Chunks, and Dimentio, the latter of whom would later betray him and take the Chaos Heart for himself.

He appears in the post-Chapter flashbacks, which reveals how he, once a kind man, turned into the nihilistic villain due to the tragic loss of his fiancée. He is one of the few (if not the only) villains in Super Mario Bros. history that is not driven by greed or jealousy, but rather, love and emotional struggles, making him one of the most tragic villains in the Mario franchise.

It is slowly revealed in vague flashbacks that Count Bleck (when he was only known as Blumiere) was originally a member of the Tribe of Darkness, a group that broke from the Tribe of Ancients after stealing the Dark Prognosticus to keep its powers from being abused. One day, Blumiere was found injured at the base of a cliff by a human girl named Timpani and nursed back to health. Blumiere ignored his father's warnings of humanity and continued to visit Timpani; eventually, the pair fell in love, breaking his tribe's taboo against marriage outside of them (which was made to keep their magical powers from weakening) in the process. Before the plans for marriage were able to work, Timpani vanished, leaving Blumiere gravely heartbroken. Soon afterward, his father revealed that he had teleported Timpani out of their dimension, explaining that their kind could never mix with humans. During the search for his lost love, Blumiere saved a bat that would be Nastasia from a trap, as revealed by Carson in Flopside. However, his efforts to find Timpani was in vain. Inconsolable, Blumiere turned to the pages of the Dark Prognosticus. He sought to destroy everything that took Timpani away from him and follow her to the grave. Renaming himself Count Bleck, he gathered a troop to help to put his plans into motion after destroying his home dimension.

When Mario and Tippi confronted Count Bleck at his namesake Castle, the count attempted to destroy them using his magic. However, the power of the Chaos Heart was negated using the power of the Pure Hearts, allowing him to be defeated and left weak, frail, and hopeless. Wanting to die because of his evil deeds for opening the Void and putting his love in serious danger, he asked Mario and Tippi to kill him. But Tippi forgave him for she still loved him, and could not do it.

It was here that Dimentio tried to shoot Count Bleck, but Nastasia sacrificed herself to save Count Bleck. Then, Dimentio mocked of Nastasia's sacrifice, took control of the Chaos Heart, brainwashed Luigi, imprisoned Tippi, Count Bleck, and Nastasia in Dimension D and tried to destroy the universe himself. Tippi and Count Bleck re-established their love, and with the help of O'Chunks and Mimi, the Pure Hearts were restored, and Dimentio, who mixed himself with Luigi and the Chaos Heart to create Super Dimentio, was defeated. In order to banish the Chaos Heart and close the Void, Count Bleck and Tippi demonstrated the true love they possessed and married. 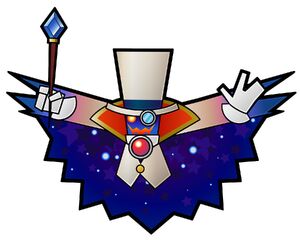 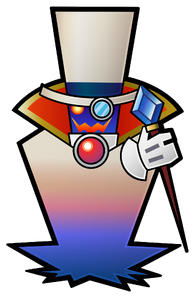 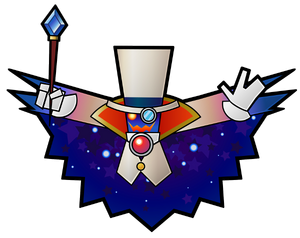 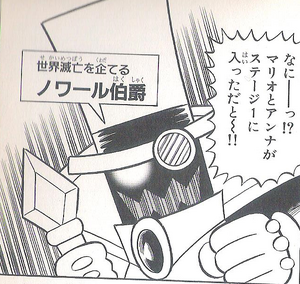 Count Bleck as seen in the manga Super Mario Kun.
Add a photo to this gallery