Count Bloodcount is an antagonist from Looney Tunes, appearing in the 1963 cartoon short "Transylvania 6-5000".

The cartoon opens with Bugs Bunny, on his way to Pittsburgh, Pennsylvania, but he ends up in Transylvania. He sees the Count's castle and walks over to it, thinking it is a hotel. The count lets him in and brings him to one of the bedrooms. Bugs is oblivious to the fact that the count is a vampire. Bugs cannot sleep and reads a book of magic words and phrases. The count appears behind him, ready to bite him, but Bugs says "Abacadabra" and the count turns into a bat. Bugs thinks that the bat is a mosquito and swats him.

In a dizzy state, the count flies outside but Bugs says "Hocus Pocus" and the count returns to normal and falls into the moat below. The count furiously storms in and tries to attack Bugs but the rabbit keeps saying the magic words in song form and the count turns into a bat and vampire back and forth and gets injured in the process. The count finally confronts Bugs and says who he is but Bugs challenges him in a magic standoff. 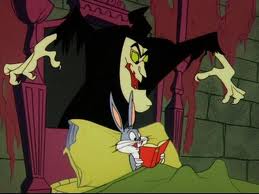 The Count about to attack Bugs. 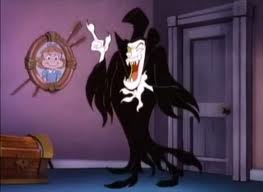 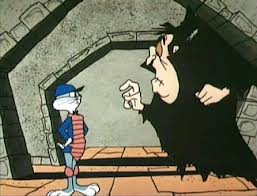 Count in a magic duel with Bugs.