Sophisticated Sadist
Count Delchi is a minor antagonist in Dragalia Lost, being the main antagonist for Malora's Dragonyule Story.

Count Delchi is a morbidly obese man with a mustache and a hairstyle that resembles that of a wig worn by judges. He wears a dark blue coat, a dark orange buttoned shirt with a white one underneath, white gloves, and dark grey pants.

Malora heads to his manor in pursuit of a stolen pendant he purchased from a con artist who cheated a woman out of. She approaches him fully intending to reclaim the necklace. He escorts her to a dark room where he uses magical arts to incapacitate her where he takes her, while she's tied up, to his secret workshop where he has his victims frozen in ice with utter despair, showing that he's not a purveyor of art, but rather misery. Eventually Valyx tracks him down and finds the workshop, freeing Malora after she fails to meet the deadline he set. However, Delchi escapes through a hidden passage. However, he only made it as far as the forest where he gets trapped by Malora who manages to recover the necklace as well. 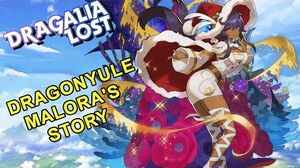 Retrieved from "https://villains.fandom.com/wiki/Count_Delchi?oldid=3845223"
Community content is available under CC-BY-SA unless otherwise noted.