Knight of the Order of the Dragon (formerly; self-denounced)

Feeding on the blood of the living.

Resting in his crates and his coffins.
Abducting peoples and babies to feed himself and his "Brides".
Brutally turning his victims into vampires.
Spending time with Mina.

Move to the United Kingdom in Europe to expand his hunting grounds (succeeded).

Bring back Elisabeta to him (failed).

Vlad Drăculea, later known as Count Dracula, is the titular main antagonist of Francis Ford Coppola's 1992 romantic horror fantasy film Bram Stoker's Dracula. He was primarily based on the character of the same name and the real life Vlad Tepes III.

He was portrayed by Gary Oldman, who also portrayed Ruber in Quest for Camelot, Milton Glenn in Murder in the First, Drexl Spivey in True Romance, Mason Verger in Hannibal, Norman Stansfield in Léon: The Professional, Egor Korshunov in Air Force One, Lord Shen in Kung Fu Panda 2, Jean-Baptiste Emanuel Zorg in The Fifth Element, Carnegie in The Book of Eli, Dr. Zachary Smith in Lost in Space, Daniel Clarke in Call of Duty: Black Ops, Vladislav Dukhovich in The Hitman's Bodyguard, General Grawl in Planet 51 and Dreyfus in Dawn of the Planet of the Apes.

Vlad Drăculea was a Romanian Knight from Transylvania of the sacred Order of the Dragon and the Voivode of the province. He was also married to a woman named Elisabeta, whom he treasured above all things.

On one fateful day in 1462, he helped lead the Catholic Armies of Europe comprising of knights, archers, and footsoldiers, into a massive battle, against the Ottoman Empire's Muslims. After a long battle, the Christian forces were victorious. However, the vengeful Ottomans shot an arrow with false news of Vlad’s death into the castle. Being the first to find it, his wife Elisabeta was unable to come to terms with her beloved's death and jumped into the river near the castle, falling to her death. After winning the battle, Vlad senses something wrong and rides back to Castle Dracula. When he arrives, he immediately enters the Castle Chapel, where he comes across somber priests looking over Elisabeta's body.

One of the priests, Cesare, hands the confused prince his beloved's last words, so he could mourn her death. As Vlad begins to cry in utter desperation, Cesare points out that Elisabeta is damned to Hell for committing suicide. This both shocks and enrages Vlad, who knocks over the baptismal font. While Cesare calls his action a sacrilege, Vlad anguishly asks him if that was his reward for defending the church. Cesare replies saying he is chosen to defend God’s people, but is interrupted by a furious Vlad who screams that he will "renounce Him" and that he will "rise from his death to avenge hers" with all the powers of darkness". Drawing his sword he plunges it into the Chapel’s stone cross, causing blood to spill. Vlad proceeds to grab the Holy Chalice resting on the altar and lets it fill with the blood, claiming that "The blood is true life!", "and it shall be mine". After drinking the blood, he roars demonically before collapsing dead. After his defilement of the cross, he rose from the grave and became a vampire.

Over the centuries, he eventually tried to deal with his loneliness in the castle by siring three vampire brides, but none could replace his lost love.

In 1897 he went by the alias of "Count Dracula". Eager to see the wonders of the new world and to expand his hunting grounds beyond Transylvania, Dracula eventually purchased property in London, Carfax Abbey. Thomas Renfield, the first solicitor that was sent to Castle Dracula was enthralled by the sinister Count, sent back to London and declared insane. Given the setback, the young solicitor Jonathan Harker ended up being sent in Renfield's place.

When Harker visited Castle Dracula, he met the Count who had the appearance of an old man. Dracula saw a picture of Jonathan's fiancee, Mina, who resembled Elisabeta and believed that she was her reincarnation. Dracula then forced Johnathan to write more letters to Mina for her to belive that he will stay for another month and that he would not take no for an answer. Over the course of the month, Dracula keeps Harker as a prisoner in his castle, on one instance saves him from his vampire brides (feeding them a baby), but eventually sails for London in the Demeter and leaves Harker's fate in the hands of his brides.

In his way to London, Dracula rejuvenates himself by drinking the blood of the entire crew of the ship by murdering everyone who was on it. The Demeter's arrival to London was marked by a massive storm and Dracula was already on the move; he hynotized Lucy Westenra to lure her outside her home so that he could rape her and drink her blood in the cementary. It was not until Mina saw them that he suddently stopped and commanded her to not see him in his bestial form. Dracula attacks Lucy repeatedly and she begins to change as a result, becoming like him. Lucy's deteriorating health and behavioral changes prompt her former suitors Quincey Morris and Dr. Seward, along with her fiancé Arthur Holmwood to summon Dr. Abraham Van Helsing who recognizes Lucy as the victim of a vampire; he eventually discovers that the creature is Dracula. Dracula, appearing young and handsome during daylight, meets and charms Mina under the alias of "Prince Vlad of Szekely". When Mina receives word from Jonathan who has escaped Castle Dracula and recovered at a convent, she travels to Romania to marry him. Maddened by grief and heartbreak, Dracula brutally attacks Lucy once more and turns her into a vampire. Van Helsing, Holmwood, Seward and Morris kill the undead Lucy the following night.

After Jonathan and Mina return to London, Jonathan and Van Helsing lead the others to Carfax Abbey, where they destroy the vampire's boxes of soil. Dracula enters the asylum, where he kills Renfield for warning Mina of his presence. He visits Mina who is staying in Seward's quarters while the others hunt Dracula, and confesses that he murdered Lucy and has been terrorizing Mina's friends, and that he is indeed Count Dracula the monster that they hunt. Confused and angry, Mina admits that she still loves him and remembers Elisabeta's previous life. At her insistence, Dracula begins transforming her into a vampire. The hunters burst into the bedroom, and Dracula claims Mina as his bride before escaping. As Mina changes, Van Helsing hypnotizes her and learns via her connection with Dracula that he is sailing home in his last remaining box. The hunters depart for Varna to intercept him, but Dracula reads Mina's mind and evades them. The hunters split up; Van Helsing and Mina travel to the Borgo Pass and the castle, while the others try to stop the gypsies transporting the Count.

At night, Van Helsing and Mina are approached by Dracula's brides. Initially, they frighten Mina, but she eventually succumbs to their chanting and attempts to seduce Van Helsing. Before Mina can feed on his blood, Van Helsing places a communion wafer on her forehead, leaving a mark. He surrounds them with a ring of fire to protect them from the brides, then infiltrates the castle and decapitates them the following morning. As sunset approaches, Dracula's carriage arrives at the castle, pursued by the hunters. A fight between the hunters and gypsies ensues. Morris is stabbed in the back during the fight and Dracula bursts from his coffin at sunset. Jonathan slits his throat while the wounded Morris stabs him in the heart with a Bowie knife. As Dracula staggers, Mina rushes to his defense. Holmwood tries to attack, but Van Helsing and Jonathan allow her to retreat with the Count. Morris dies of his wound, surrounded by his friends.

In the chapel where he renounced God, Dracula lies dying in an ancient demonic form. He and Mina share a kiss as the candles adorning the chapel light up and the cross repairs itself. Dracula turns back to his younger self and asks Mina to give him peace. Mina thrusts the knife through his heart and as he finally dies, the mark on her forehead disappears, as Dracula's curse is lifted. She decapitates him and gazes up at a fresco of Vlad and Elisabeta ascending to Heaven together, reunited at long last. 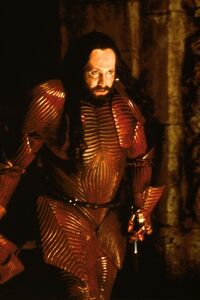 Dracula in his 15th century knight armor as seen in the movie. 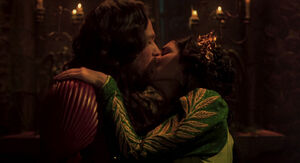 Dracula and Elisabeta sharing a kiss before he heads out to battle the Turks. 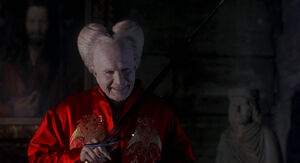 Dracula as a an old man. 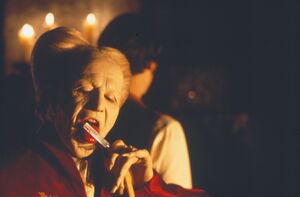 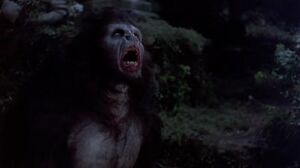 Dracula in his wolf form. 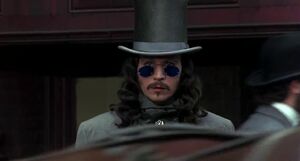 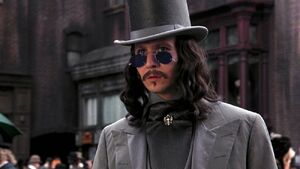 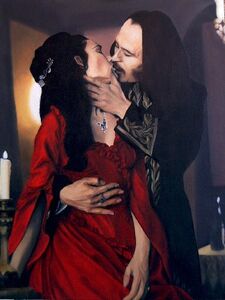 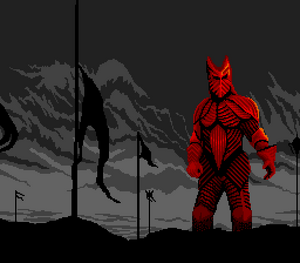 Drcaula standing on the battlefield wearing his 15th century knight armor as seen in on the SNES videogame.