Drake von Vladstone's forward appearance is an almost-exact copy of Scrooge, except he wears a more 17th century form of noble-wear (gray vest, brooch, and a black cape), his hat a purple ring around it rather than red, his eyes have purple bags, and two vampire fangs hang from the top of his mouth.

The boss fight takes place in Transylvania. Count Dracula Duck only has one attack. He teleports almost in a way like the Castlevania version of Dracula does and summons a bat toward Scrooge McDuck. Scrooge must pogo jump the bat to get a boost to pogo jump on him a few times until he is defeated. After his defeat, Magica De Spell and Flintheart Glomgold race Scrooge to the top of the pillar for all of the treasure collected.

In the remastered version, he has a little bit of a story behind him. When the Beagle Boys broke into Scrooge's money bin, they were after the portrait of Drake Von Vladstone, which Scrooge bought from Magica under disguise. When the portrait is broke open, Scrooge used Gyro's computer to decipher a treasure map for five treasures: the Sceptre of the Incan King in the Amazon, the Coin of the Lost Realm in Draculesti Manor at Transylvania (which Vladstone was the heir to), the Giant Diamond of Inner Earth in the African Mines, the Lost Crown of Genghis Khan in the Himalayas, and the Green Cheese of Longevity within the Moon. Scrooge, being the stingy adventurer, goes out on a quest with his nephews to recover the treasures and cement his place as the richest duck in the world.

When the two finally approached Magica, Flintheart snatched the dime from Scrooge's hands and revealed that he and Magica were working together the whole time. Magica revealed her ruse to Scrooge that she sold Drake Von Vladstone's portrait with the treasure map inside for five bucks so Scrooge would do the treasure hunting, saving Magica the trouble of finding the treasures. Even though she got the number one dime from Scrooge, she refused to let go of his nephews and went on with her plan of summoning Dracula Duck under her control. Her first command to him was to kill Scrooge McDuck.

Count Dracula Duck still has his old attack from the NES version, but after you pogo jump on his head, Magica uses her cauldron to enhance him with new attacks. A yellow vial thrown in the cauldron would turn him into a giant so he can attack by biting Scrooge. A green vial thrown in the cauldron transforms him into a dragon, and he attacks by breathing five fireballs at Scrooge. A red vial thrown into the cauldron transforms him into a flock of bats forming a ceiling, attempting to crush Scrooge with his only safety being one opening. When he is near defeat, Dracula Duck goes higher and summons two bats at Scrooge, which he must pogo jump both in order to reach him.

After he is defeated, he disintegrates into dust, and Scrooge races to retrieve his dime from Magica and escape Mount Vesuvius before it erupts. 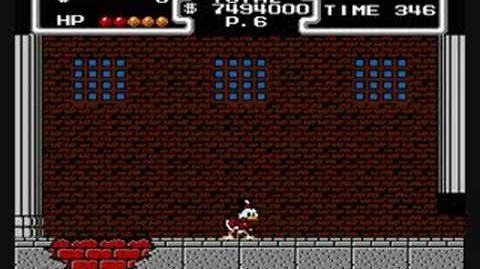 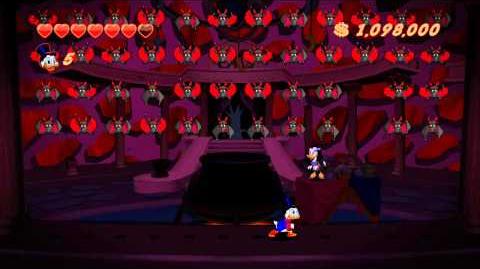 Retrieved from "https://villains.fandom.com/wiki/Count_Dracula_Duck?oldid=3433715"
Community content is available under CC-BY-SA unless otherwise noted.