Although the vampire duck Count Duckula is harmless in his own series, he is an antagonist in the Danger Mouse series. He is a showbiz-obsessed vampire duck who wanted to get his own show at the time. However, his utter lack of anything approaching talent made his attempts to "entertain" rather terrifying (he has been known to use his 'act" as a torture device). This ongoing gag of him craving his own show and show business inspired a later Cosgrove Hall spin-off series, titled Count Duckula, starring the Count himself.

The two versions of the character differ, however; the Danger Mouse Count Duckula is not a vegetarian, makes far greater use of his vampiric magic, and has an accent consisting of a Daffy Duck-like lisp (instead of the stereotypical Transylvanian accent), as well as occasional stuttering and duck-like squawks and quacks. In addition, he once teamed up with Danger Mouse's nemesis Baron Greenback.

This discrepancy is explained when his DM incarnation falls to ashes and is resurrected during the Astronomical House of Asparagus. Instead of a libation of blood, the nanny puts tomato ketchup into the offering, creating the world's first vegetarian vampire duck. In the comic book series, the new incarnation makes instant friends with Danger Mouse, much to the chagrin of the ghoulish butler vulture who really wanted his master to drain DM's blood. In England, Duckula has crisp vowels and an American-type accent. 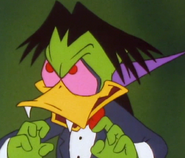 Add a photo to this gallery
Retrieved from "https://villains.fandom.com/wiki/Count_Duckula?oldid=3893542"
Community content is available under CC-BY-SA unless otherwise noted.