Live up to the Harkonnen family name.

Glossu Rabban is a minor antagonist in the Dune universe. Due to his penchant for sadism and cruelty without the intelligence of other members of the House of Harkonnen, he was given the nickname "The Beast." Rabban was the elder brother of Feyd-Rautha, and the nephew of Baron Vladimir Harkonnen.

He was portrayed by the late Paul L. Smith (who played Bluto in the 1980 Popeye film) in the 1984 film and by László Imre Kish in the 2000 Sci Fi Channel (now SyFy) miniseries.

What none of the Harkonnen leaders anticipated was that Duke Leto's consort Lady Jessica and son Paul Atreides would survive and be taken in by the Fremen natives of Arrakis. Paul would lead the Fremen in a war against the Harkonnen, which brought spice production to a standstill. Fearing for his life, Rabban never told his uncle of the difficulties he was having while trying to stop the Fremen.

In an attack on the Harkonnen, the Fremen got a hold of The Beast. The Beast met his end then, with his head being delivered to the Emperor (in the 1984 film). 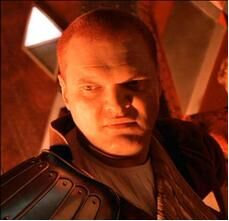 László Imre Kish as Rabban in the 2000 miniseries.