Gloating over his dancing skills.

Forcing his servants to produce exports for profit.

Marry Polly to inherit her silver.

Kill Polly and Feathertop in revenge for his humiliation (both failed).

Count Grisham is the main antagonist of the 2000 Warner Bros. direct-to-video animated musical film The Scarecrow. He is the egotistical founder and mayor of his town called Grisham Heights until the events of the film.

He was voiced by Ray Porter, who also played Dale "The Whale" Biederbeck in Monk, Hestler Jones in Justified, the Nightmare Train in The Little Engine That Could and Darkseid in Zack Snyder's Justice League.

Being the mayor of Grisham Heights (aided by his manservant Wooden, an unnamed maid, an unnamed falcon, and two unnamed thugs), Grisham is obsessed with being the best dancer in town as well as forcing the town mill to produce clothes nonstop for profit (much to the ire of the servants working there). Years ago, he was a dance student until he chased his dance instructor into hiding when he accidentally discovered that she was a witch. He then used a dancing spell to get women to love him. Around the same time, a young girl named Polly is working at the town mill to earn enough silver to buy her freedom and has been hiding her silver at the witch's garden beneath the feet of the witch's scarecrow. Noticing her loneliness, the witch brings the scarecrow to life to keep Polly company.

As the years go by, Polly has earned more than enough silver to buy her freedom, but decides to stay a little more to help three orphaned children. Around the same time, Count Grisham intends to marry Polly for her silver and constantly attempts to woo her, though Polly is repulsed by his selfish behavior and continuously turns him down, which angers him. On the day she earns the last silver coin that the children need, Grisham finds out the truth and sends the workhouse mill overseer Cheswick to find and steal Polly's silver, hoping that he would use it to blackmail Polly to marry him.

Though Cheswick manages to steal Polly's silver, the Scarecrow reveals himself in an attempt to retrieve it and frightens Cheswick, who runs to Grisham and his two thugs for help, though Grisham doesn't believe Cheswick's story. The scarecrow then uses a magic feather (given by the witch) to pose as a human traveler named Feathertop to come into town and retrieve the silver for Polly. The next morning, Feathertop soon learns that Grisham has formulated a plan to ensnare Polly with his "love spell dance" by holding a dance contest with the stolen silver as the prize. To prevent this, Feathertop shows off his dancing skills to a crowd in the town square, which prompts Polly to ask him to teach her and be her partner at the dance. During her lesson, the two share a romantic, beautiful dance and begin to fall in love, something which Grisham later noticed. Not wanting Feathertop to ruin his plan, the jealous Grisham sets his thugs to trap Feathertop so he cannot attend, which would give him a chance to use his love spell on Polly. Fortunately, Feathertop escapes the thugs and attends the contest with Polly, using their dance moves to win the contest and earn back the silver. With Polly and the children finally earning the freedom they need, both Feathertop and Polly confess their love for each other and plan to marry the next morning.

However, Grisham is upset by this turn of events and confronts Feathertop at his mansion, eventually realizing that Cheswick was right after seeing Feathertop's true reflection through several mirrors. The next day, Grisham ties up Feathertop in the same garden and sets it on fire, hoping that Feathertop will perish in it. He also takes Feathertop's magical feather to pose himself at Feathertop in hopes of tricking Polly into marrying him at the local church so that he can send the orphans back into the mill and keep Polly for himself. However, Feathertop's friends, the witch's anthropomorphic broom named Bristles and a talking mouse named Max, manage to rescue Feathertop and retrieve the feather just as Grisham enters the church, blowing the latter's cover. An annoyed Polly demands to know of Feathertop's whereabouts, but Grisham refuses to explain and instead demands Polly to marry him, to which she refuses. Growing impatient with Polly's constant refusals, Grisham angrily orders the priest to marry both him and Polly by force, but the priest refuses to do so, resulting in a humiliated Grisham to head back to his mansion in shame while Feathertop gets his feather back.

Fed up with the constant failures and humiliation, Grisham angrily vows to kill Polly for rejecting him, but Wooden abandons him to warn Polly while Bristles (who was eavesdropping) flies off to warn Feathertop of Grisham's intentions. Polly and the children attempt to escape in a carriage, but the only way out is across a bridge over a gorge that Grisham has ordered his thugs to weaken. Feathertop arrives to the rescue by attempting to hold the supports together, forcing the thugs to escape away from the scene. Fed up with this, Grisham tries to kill Feathertop himself, but the bridge breaks as Polly and the children cross to the other side, and Grisham loses his grip and falls screaming to his death in the chasm below. Feathertop, on the other hand, escapes the bridge's destruction unscathed, as his selfless sacrifice was enough to render himself a real human being (per the witch's magic).

With Grisham finally gone, Grisham Heights was renamed Swingtown, and everybody dances in celebration (with the exception of Cheswick, who ends up being taken away by Grisham's former thugs for his foolish attempt to expose Feathertop as a living scarecrow). 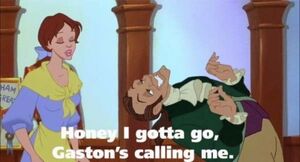 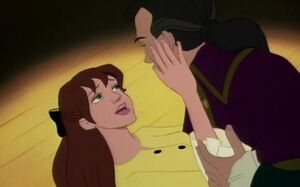 Count Grisham attempting to use his love spell dance to make Polly fall in love with him. 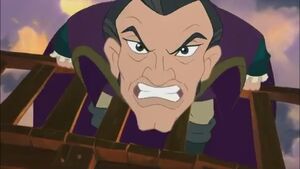 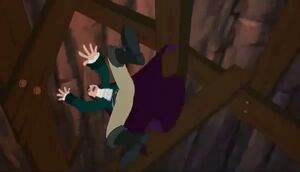 Count Grisham falling to his death.