Marrying to Amalia on the condition that both kingdoms prosper, in order to use all the vegetation of the Sadidas as fuel

Count Jacquemart Tocante of Harebourg (also known as Count Frigost) is a half-god son of the god Xelor, in other words, he is somehow immortal (he does not age, but can be killed). He lives in a castle on top of Mount Torrideau volcano on the island of Frigost where he develops machines of all kinds.

This genius inventor turned the fate of his people upside down the day he created the Clepsydra, a machine that has the power to master time. Although his intentions of departure are commendable, he has despite himself made the misfortune of the inhabitants of Frigost.

In the first ova, he was able to discover all their adventures on a screen and ended up falling in love with Amalia.

With the intention that his island, which was punished by winters of the most frozen, had the opportunity to compete commercially with the Amaknean Continent, harebourg designed a monumental Clepsydra (a water clock) with the help of the Goddess Jiva (a minor goddess of the month of January) and her Dofus of Ice, Harebourg's machine could essentialy "skip" the month of December and it's harsh cold, granting Frigost afull year of warm, plentiful seasons.

But Harebourg's actions attracted the demonic god Djaul, the minor god of December. In his unbridled rage, the demon decided to freeze the island, and condemned Frigost to live in an eternal winter. A cold wave so brutal and so powerful that the Count never recovered: The ice affected his brain and Harebourg was frozen.

From that day, Harebourg sinks a little more every day into madness. Moony, obsessed by the cold, books and watches, he lives in his tower in the Harebourg county, in his fortress at the top of Mount Torrid. He does not trust anyone, not even his henchmen. He only does it in the mechanical beings that are built quickly before his eyes.

The temporal loop had the effect of plunging Frigost into oblivion, it is only in the year 640, after almost a century that the inhabitants managed to reconnect with the outside world.

One solution might be to remove the Clepsydra Ice Dofus to thaw the island, but this will disrupt the course of time and the inhabitants of Frigost will join the normal time frame and age instantly and die.

In Wakfu era, joined the Brotherhood of the Forgotten, an organization composed of children of gods and dragons. Years later, he left the Berg Island (name that Frigost received after his rediscovery after the Great Wave) with the help of his faithful henchman Sylargh and undertook the search for the Cawwot Dofus without further explanation of his plan. After the death of Nox, he recovered the remains of his machines to study them and he came across the videos recorded by the noxins who spied on Yugo and his friends.

He wanted to marry the princess Amalia Sheran Sharm of the Sadida Kingdom in exchange for the two Selatrop Dofus that he had in his possession, which would serve to prevent the Sadida Kingdom from being swallowed up by the sea waters that were becoming higher every day because of Ogrest. But his intentions were very different, Harebourg only wanted to marry Amalia to use the trees of the Sadida Kingdom as fuel for Frigost, and thus save his land from the eternal cold that surrounded him. Unfortunately for him Yugo discovered his evil plan in time and interposed in his wedding with Amalia, was defeated by the Tofu Brotherhood and froze while waiting for new adventures.

Harebourg's troubles are not over yet: now that Yugo has recovered the Dofus he was in charge of, he is accountable to the Sisterhood who no longer appreciates seeing him pass the interests of his island before those of the world. Lady Echo, who heads the guild, is responsible for punishing him by freezing him in the mirror. Resigned to the fate that awaits him, Harebourg accepts the sentence without trying to defile himself and is frozen for an indefinite period. With the collapse of Oropo's tower and the destruction of the entire dimension it was located, Harebourg is presumably dead.

In the game, which is set a couple years before the cartoon, Harebourg makes his first appearance as a pseudo-boss (as he is not winnable) in the main quest line of Frigost, where he is awakened and manages to head to Wabbit Island to steal the Cawwot Dofus. Currently he is a distant character in astoryline called Eliocalipse, where his presence looms over the players as a mastermind behind many events that come against the player, including meddling with challenging bossfights to increase the difficulty.

As a Xelor and demigod of the god of same name, Count Harebourg is gifted with incredible abilities over Time. 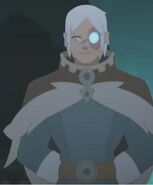