Count McGuire, also called King McGuire, is one of the main villains from Ys III: Wanderers From Ys and it's remake Ys: The Oath in Felghana.

Count McGuire is the lord of Valestein Castle, and current ruler of the land of Felghana. The townsfolk of Redmont all have a low opinion on him, due to him applying heavy taxes on it's people. He is seen along with the bishop Nikolas, trying to retrieve the statues that house the power of the demon Galbalan, though his reasons aren't initially revealed. For this end he hired Chester Stoddart (who actually seeks revenges on the count, as he blames him for the destruction of his hometown) and later attacked Redmont, kidnapping some of the villagers and imprisoning them on his castle.

As it is later revealed, McGuire was a low-ranked nobleman of the Romun Empire, who always felt he should became a man worthy of his wife Elisabeth, who came from a family of much higher status than his. After Garland reveals himself as the true mastermind, having manipulated both the count and Chester, McGuire moves to Redmont with his family, and after Galbalan is finally destroyed he promises to work with the people to make Felghana a better place for everyone. 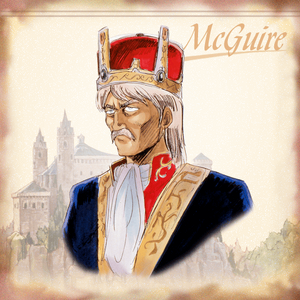 McGuire in Ys III: Wanderers from Ys.
Add a photo to this gallery

Retrieved from "https://villains.fandom.com/wiki/Count_McGuire?oldid=3597690"
Community content is available under CC-BY-SA unless otherwise noted.