A Series of Unfortunate Events

Count Olaf is the main antagonist of Lemony Snicket's A Series of Unfortunate Events novel series and its 2004 film adaptation. Count Olaf is greedy and will go any lengths to get what he wants, even if it involves murder. He appears in every book of the Series of Unfortunate Events, in some form or another. He is also the archenemy of Violet, Klaus and Sunny Baudelaire.

He is a very intelligent villain, having the ability to stay ahead of the authorities and know just what they will do in order to hunt him. Count Olaf can fool even the most intelligent (mostly dumb) person around him and even guardians of the Baudelaires-some of whom have known Olaf for years - are not above his deceit and villainy. Except he can't fool the Baudelaire siblings, because they appear to be a lot more smarter than Count Olaf, and the adults who should've never foolishly listened to Olaf.

In the movie, he was portrayed by Jim Carrey, who also played the title character in The Mask, The Riddler in Batman Forever, the title character in The Cable Guy, The Grinch in How The Grinch Stole Christmas, Steve Gray in The Incredible Burt Wonderstone and Dr. Robotnik in the Sonic The Hedgehog film series. In various animated adaptations, he was voiced by Fred Tatasciore, Tony Jay, Christopher Lloyd, Jim Cummings, Corey Burton and Keith David.

Count Olaf is a ruthless, evil, cruel and immoral man who showed no concerns about physically beating children as young as infants, as is shown when he imprisons Sunny Baudelaire in a cage, and tries to marry fourteen year old Violet Baudelaire, although this is merely for his own financial gain and not for romance - As he plans to kill Violet along with her siblings Klaus and Sunny. He has abused all the Baudelaires in some way, be it emotionally, physically or mentally. Count Olaf was apparently evil from his schooldays, as Lemony Snicket writes that "one day the world will know of O's treachery" and that "the Sun cannot shine through the blackest of skies" and Olaf seems to enjoy flattering people to gain their trust, such as Dr. Montgomery Montgomery, Josephine Anwhistle, Vice Principal Nero, Sir of Lucky Smells Lumbermill and even Mr. Poe, the Baudelaire's banker.

The world has originally been well aware of Olaf's evil acts, as in old newspapers in the books there are cuttings from Italy and Greece about a man resembling Olaf killing a bishop, escaping from prison within five minutes, and then throwing a widow off a cliff. It is likely Olaf's flattering skills stem from his days in the theater, with director Gustave Sebald, a young V.F.D. agent.

Count Olaf assumes different disguises while targeting the Baudelaire children's fortune where each disguise has his one eyebrow and his ankle tattoo covered up by something. Among his disguises are:

{{Quote|Oh, the Captain loved the ladies But he dragged himself a wife Now he's wishin' he was fishin' But he's on the hook for life! Well, I guess he shouldn't 've oughta But he drowned her in the water And then a flounder downed her That's why they never found her.|Count Olaf sings a sea shanty as Captain Sham towards the end of the credits.

In the film adaptation, the Baudelaire orphans are sent to live with Count Olaf, their only living relative, after a mysterious fire destroys their home and kills their parents. Olaf's involvement in the fire was long suspected by the Baudelaires. When they finally confronted him and accused of him of starting the fire, Olaf did not seem surprised by the accusation but asked them "Is that what you think?" Whether this is a denial of involvement in the event or means something else is unknown.

Olaf was an actor and had an entire group of similarly evil associates who he refers to as his "theatre troupe". He wrote his own plays, under the pseudonym "Al Funcoot" (an anagram of "Count Olaf").

During the time the Baudelaires lived with him, the children immediately saw Olaf as a short-tempered and violent man. Olaf provided them with one filthy room and forced them to do difficult chores (such as making them chop wood solely for his own entertainment) as he schemed to seize control over their fortune. Olaf once hit Klaus hard for talking back to him, and picked up and dangled Sunny for saying No! No! No! in response to his demand for roast beef instead of the puttanesca sauce they made.

Later, Olaf had the children participate in a play in which Violet plays a woman who gets married to a character played by Olaf. The children learned that Olaf was using the play to disguise the fact that the marriage will be legally binding and that he will have control over the fortune once the wedding ceremony is complete. To ensure that the children cooperate with the plan, Olaf kidnapped Sunny and had her tied up, put in a cage, and hung outside his tower window, threatening to murder her if the children refused to cooperate.

The plan to marry Violet Baudelaire to gain the inheritance went awry. Violet managed to thwart Olaf's plan by signing the marriage with her left hand instead of her right, which as she was right-handed, was the required one to make it legally binding. Olaf was exposed as a criminal and fled, but not before promising to Violet that he would get his hands on her fortune no matter what and then murder her and her siblings with his bare hands. The children were sent to different relatives, with Olaf following in pursuit. Olaf's plans became more dangerous and murderous in nature. Many of them included the murder of the children's guardians, such as Uncle Monty and Aunt Josephine. His plans were often complicated and many of the earlier ones involved him attempting to get the orphans legally into his care. Later, he simply wanted to abduct one child, murder the other two, and use the kidnapped one to blackmail Mr. Poe into giving over the fortune. Regardless of his tactics, Olaf's plans were always aimed at the goal of abducting the children through elaborate methods.

Olaf wears a new disguise of someone who works under the guardians or works near the area, usually murdering the person who had the occupation previously, that usually fools everyone but the Baudelaires. One or two of his henchmen, also usually disguised, accompany him and aid him in executing his schemes. 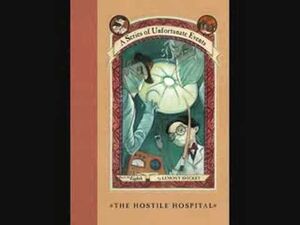 The Gothic Archies- Scream and Run Away