Ruler of the Carpathian Mountains

Feeding on the blood of humans.

Bringing plague and chaos to the town near the Carpathian Mountains.

Bring the Plague to the Carpathian townspeople.

Kill Thomas Hutter and his wife.

Attempting to plague the town

Count Orlok is the main antagonist of the 1922 classic silent horror film Nosferatu: A Symphony of Horror.

Orlok is one of the most iconic monsters of classic horror - rivaling Dracula, Godzilla, Frankenstein's Monster and The Wolf Man. In this regard, he is also notable for being more faithful in many ways to the traditional representation of vampires in folklore, being a hideously demonic creature rather than an attractive gentleman.

He was portrayed by the late Max Schreck in the original film, and will be portrayed by Doug Jones in the upcoming 2020 remake.

Not much is known about his past, though it is implied that Orlok is spawned from the Seed of Belial, the lieutenant of Satan. Orlok resides inside a decaying castle in a lost corner of Carpathia, so he terrorizes the people there over centuries by plagues.

Count Orlok first poses as a nobleman from the Carpathian Mountains who moves to the city of Wisborg in Germany - he brings death with him as a result of his vampiric nature. He lives in a ruined castle high in the mountains and local townsfolk refuse to go anywhere near this castle, save for the film's protagonist, the young Thomas Hutter, the assistant of a Wisborg estate agent, who travels to his castle to show properties for sale in Wisborg.

Orlok conceals himself in one of his soil-filled coffins and is loaded onto a ship bound for Wisborg. On board the ship, he kills every crew member until only the captain and his first mate remain. Later when the first mate goes to the cargo hold to investigate, Count Orlok rises from his coffin, terrifying the first mate who jumps overboard in fear. The captain ties himself to the wheel of the ship when Count Orlok creeps up on him and kills him.

Upon his arrival in Wisborg, he spreads disease and plague, forcing the local authorities to declare a quarantine and provoking hysteria amongst the citizens.

Orlok stalks and attacks Hutter's young wife, Ellen, in her room, but during the pleasure of drinking her blood, he is caught unaware by the rays of the rising sun. When he heard the crowing of a rooster, he suddenly realized his own flaw and was caught in the sunlight, which burns him away in a cloud of smoke, killing him and ending his reign of terror.

Count Orlok was an unofficial adaptation of Bram Stoker's famous Count Dracula; however, because the studio is unable to obtain the rights to Dracula, they opted for making their own character. In the end, the two vampires would become very different beings, as Dracula would become known for his gentlemanly charm and cunning, while Count Orlok would come to embody the much more demonic, diseased side of vampire lore.

(Ironically Count Orlok is actually much more faithful to true vampire mythology than Dracula — except for the weakness to sunlight, which was added to the film and later became a staple of vampire fiction.)

Count Orlok has inspired an entire subspecies of vampire also known as Nosferatus (in honor of the film) — these beings tend to be more monstrous looking and vicious than the more human-like vampires seen in other fiction. They are also normally more demonic than normal vampires as well — midway between a vampire and a mutant. 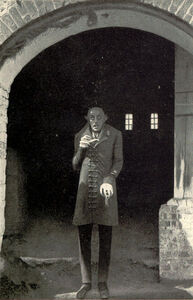 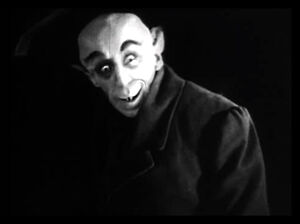 Count Orlok as he appeared in Graveyard Shift. 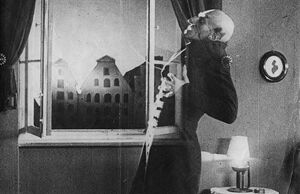 Orlok's death.
Add a photo to this gallery

Retrieved from "https://villains.fandom.com/wiki/Count_Orlok?oldid=3497264"
Community content is available under CC-BY-SA unless otherwise noted.