Head of the Grand Council of Haven City

Researching the Precursors and Eco.

Unlock the Precursor catacombs and flood the universe with pure light (failed).

Become a Precursor (succeeded, but then backfired).

Count Veger is a major antagonist in the Jak and Daxter video game series, serving as one of the main antagonists in Jak 3, and a minor antagonist in Daxter. He is the one who banished Jak into the Wasteland outside the newly reformed Haven City and also taking him from his father Damas at a young age. Due to his history with Jak, he is considered to be one of the main antagonists of the whole series, even though he only appeared in one game (not counting his cameo in Daxter) and was never faced in a boss battle.

He was voiced by Phil LaMarr, who also voiced Vamp in the Metal Gear Solid games, Mad Jack in Samurai Jack, The Beast in inFamous, Baxter Stockman in Teenage Mutant Ninja Turtles (2012), Goigoi in The Lion Guard, Aquaman in the Injustice games, and Rag Doll in The Flash.

Veger is a tall, slim man with a hooked nose and a large bald spot on his head. He appears to be in his 40's to 50's. He wears a waistcoat, cravat, spats, and a long, blue coat, giving him a dignified look.

As an ottsel, Veger has a similar appearance to his human form. His hair is a bit longer, surrounding a naked blot of skin, similar to his natural bald spot. His fur is brown, rather than orange, with a spotting pattern that resembles his liver spots, from when he was human. His long coat disappeared, along with his pants, when he was transformed into an ottsel.

For many years, Count Veger held great influence within Haven City as the chair of its Grand Council. In the past, he conspired with Baron Praxis to overthrow King Damas as ruler of Haven City and supported Praxis to take his place. He also notice of Damas' son Mar, whose purity met the requirements to awaken ancient Precursor technology. Veger kidnapped the boy, separating him from his father, and hoped to use him to get his hands on the technology so he could use it to shield the planet. However, at some point Mar escaped and was taken in by the Underground.

Count Veger is seen in the very beginning of the game, when he banishes Jak to the Wasteland for supposed crimes against the people, despite the protest of Ashelin, Daxter, and Pecker. He also opens the catacombs by destroying the Palace in a missile attack (blamed on the Metal Heads) and killing thousands of people in the execution. When he returns to Haven City, he takes command, launching a suicide attack to the Port, claiming it only to have half the Freedom League being cut off from New Haven (showing his ineptitude as a military commander). Desperately, he activated a white shield wall to prevent the Metal Heads from attacking from the ruins. He then started to look for a way to reach the Catacombs via the help of an acquaintance of Jak, Seem and her monks, who he sways onto his side promising her that "she would meet her makers".

When Jak intends to return to Haven City, Count Veger ambushes him with a giant Precursor robot that he activated with a Precursor staff in the old Eco mines. After revealing that he destroyed the Palace to gain access to the Catacombs, he ran away and is next seen coming to the Freedom League HQ, claiming that his guidance through the Catacombs is clearer than Jak's (based on his research and his belief that the Precursors will reject Jak), but got defeated in a vote between him and Jak. Ashelin then officially dissolved the Grand Council and fired Count Veger, who left the HQ outraged.

Later, Veger watched Damas as he died in the ruins near the Catacombs entrance crushed by the Slam Dozer. Count Veger then taunted Jak about how he kidnapped Jak's younger self and mocked Damas' death, then left for the Planetary Defense System. After getting to the core, he threatened Jak with a gun and forcefully took the power of the Precursor. At that moment, a door opens revealing a trio of ottsels operating Precursor machines. At first Veger assumed they were intruders but the ottsels confessed that they're infact the Precursors and had exaggerated most of the myth involving themselves, however they still proved to be the most powerful beings in the universe. The Precursors "kept their word" of evolving Veger into one of them by transforming him into an ottsel, which he quickly regretted.

He is last seen in the ceremony of the planet's victory over the Dark Makers and intended to leave with the other Precursors, when Kleiver took Veger and forced him to be his "sidekick" much like Daxter is to Jak and threatened him saying "We're going to be a great team. Just don't make me angry!".

It is unknown what happened to Veger afterwards, as he was not seen with Kleiver in Jak X: Combat Racing. It is possible that Kleiver ate Veger, as he had mentioned he likes Ottsel meat before, its also possible Veger was imprisoned for life as punishment for his various crimes.

Count Veger is best known as the arrogant power broker of Haven City's Grand Council, who feels he is superior to his enemies and to his allies. This superiority complex causes him to often be mocked by other main characters. He appears to have no sense of humor: e.g. Daxter's intentional mispronouncing of his name merely leads to an angry outburst of "It's Veger!"in another scene he is called Vegan which causes him to yell ''Veger! Its Veger you idiot!'' (Though it is possible Veger simply cannot stand Daxter's personality or Veger's superiority complex gets in the way of enjoying any jokes about himself.) In some ways he means well, but he has immoral methods and motives (such as destroying Haven Palace to open a path to the catacombs, which resulted in a major war breaking out and hundreds of deaths). Count Veger is quite cruel and sadistic and shows despicable glee towards Damas dying in the hands of Jak without knowing the truth.

Veger also seems to be a very religious man and is very devoted to the Precursors. In turn, he seems to be disgusted with Dark Eco, viewing Jak and Daxter as abominations. He bears all the traits of a religious fanatic and is horrified when the Precursors reveal themselves as Ottsels (even more so when he realized what he was about to become). It is uncertain what exactly became of his former religious stance but it would seem he was willing to forgo his initial prejudice and dismay in an effort to make the best out of what he viewed as an awkward, rather than bad, situation (based on his sigh and following statement of "this is going to be a long trip"). 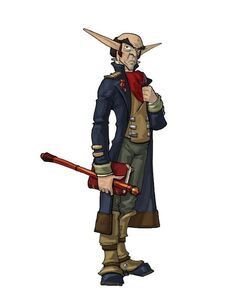 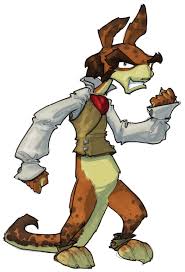