Count Vertigo is the name of two supervillains originating in DC Comics, and are both primarily enemies of the Green Arrow.

Werner Vertigo is a man with nothing to lose. Born to a royal family in the small nation of Vlatava, Werner was the victim of an inner ear defect that affected his balance. After having a special device implanted to cure the problem, Werner altered it to allow him to affect other people's sense of balance. After his family lost their fortune, he turned to a life of crime, and became Count Vertigo. He repeatedly ran afoul of Green Arrow and Black Canary, and has been a repeat member of the Suicide Squad. His homeland was destroyed by the Spectre, and Vertigo is now left with nothing.

Vertigo has no superpowers, but the device implanted in his skull allows hims to alter other people's sense of balance, and grants him limited flight.

Werner Zytle is the bearer of the Count Vertigo title in the New 52 timeline. Here, he is the ruler of the tiny nation of Vlatava. Though of noble heritage, his family lost their fortunes and had to flee to Canada. While there, Zytle became involved with organized crime, using the profits from his illegal activities to finance return to Vlatava and reclaim his birthright. Though appearing to be a kind and benevolent monarch, he continues to be involved in organized crime, using the alias Count Vertigo. When Green Arrow travels to Vlatava to rescue a kidnapped Shado, Vertigo notes that the Emerald Archer will have to aim to fight him, and his power will make that impossible. Oliver's allies remotely detonate an E.M.P. arrow in his quiver, giving him and Shado a chance to escape. Later, Zytle joins the Longbow Hunters being formed in Seattle in their intention to kill the Green Arrow.

A modified iteration of the original Count Vertigo debuted on the first season of Arrow, where he is a drug lord who developed a drug called "Vertigo", that causes disorientation in the users. His real name is also changed to Cecil Adams, and his alias was originally "The Count" before he later changed it. He was portrayed by Seth Gabel.

Werner Zytle debuts in the Season 3 premiere, where he takes up the name "Vertigo" following the Count's death. He modifies the drug to cause its users to hallucinate fears that they never believed to have. He is portrayed by Peter Stormare.

Count Vertigo is seen at the beginning working with the Suicide Squad to assassinate Tobias Whale who has a flash drive full of information on the squad's operations. After fighting through Whale's henchmen, Vertigo uses his powers to force the mobster to kill himself with a gunshot to the head. Just then, Count Vertigo turns on Punch and Deadshot revealing that he and Jewelee are working together since their time in prison. Vertigo announces he intends to copy the flash drive, hand Waller the original and have a "nest-egg" with Jewelee. Deadshot exposes Vertigo as a traitor and Waller detonates the bomb, killing him. 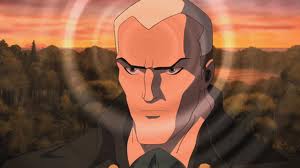 Count Vertigo as he appears in Young Justice. 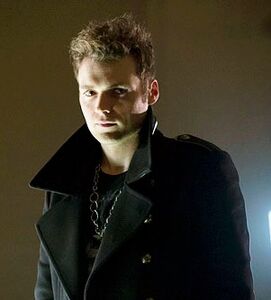 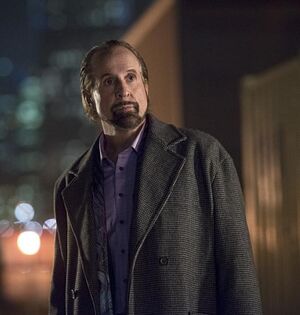 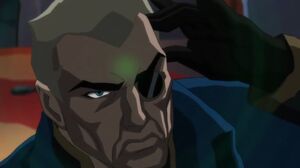 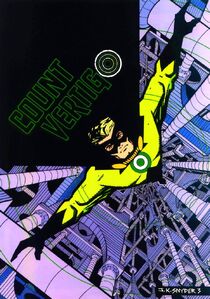 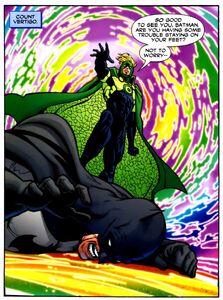 Retrieved from "https://villains.fandom.com/wiki/Count_Vertigo?oldid=3323167"
Community content is available under CC-BY-SA unless otherwise noted.