Have an unlimited army of super-soldiers by any means necessary and to destroy Barogue and Andantino.

Count Waltz is the main antagonist in the videogame Eternal Sonata.  He is the corrupt ruler of Forte that wants more power to control the world, even it means selling Mineral Powder to risk his own citizens' lives and turning them into magical soldiers that would go completely mad.

He was voiced by Junko Minagawa in the Japanese version, and Liam O'Brien in the English version.

Throughout most of the game, Count Waltz pretty much sat around in the throne. He orders Tuba (and later, Rondo) to kill the party, except for Salsa. That of course, failed. Count Waltz also wanted Fugue to find the glowing agogos to increase the mineral powder's effect's, with Rondo's surveillance. Waltz at some point ordered Rondo to kill Calves if she revealed the fact that she was a spy. Rondo informs him that the reason the agogo's glow was because they were very close to Polka (not knowing about her astra).

At Mt. Rock, Count Waltz and Legato took action and rode their army of dragons to the summit. There, Waltz asked Polka to come with them. After confirming that Rondo's statement was true, Polka came close to Waltz, but he knocked her down hard, knocking her unconscious. Then he and the gang battle on the summit. After the battle, he strongly ordered Legato to drink the powder that was affected by the glowing agogo; Legato turns into an unusually powerful monster, leaving Waltz impressed. He tells Legato to use that power to wipe out their dragons and afterwards, everyone else. However, due to Polka's astra, the light helped turned the tides and wiped out Waltz and Legato instead. Jazz implied "No, they probably ran away."

Count Waltz is cold, merciless, power-hungry, ambitious, and very calm-like. He does not like it if anyone would fail him or try to disobey his orders. He's also careless on what happens to anyone or any country, even his own subjects. All he ever truly cares about is the idea of taking over everything wih an iron fist. 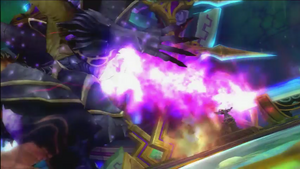