Escape from her crimes

Countess Vera Rosakoff, or simply known as the Countess, is a recurring character in Agatha Christie's Hercule Poirot series. She is both a friend and adversary to Poirot.

She appeared as the main antagonist of the short story "The Double Clue" which would be included in Poirot's Early Cases, later as the secondary antagonist-turned-supporting character in The Big Four, and the deuteragonist of "The Capture of Cerberus", the last short story of Labours of Hercules.

In Agatha Christie's Poirot, she was first portrayed by Kika Markham in "The Double Clue" (1991) and later portrayed by Orla Brady in "Labours of Hercules" (2013). In the 2001 adpatation of Murder on the Orient Express, she is portrayed by Tasha de Vasconcelos.

The Countess is a flamboyant, eccentric and devious Russian former aristocrat-turned-thief who became a refugee following the October Revolution. She currently had no personal fortune. She previously met Poirot in The Double Clue, where Poirot was smitten with her. She was an agent of the Big Four who later becames a double agent and an ally to Poirot.

The Countess is described as a tall and beautiful middle-aged Russian woman with long, fiery red hair. It was speculated by Hastings that Poirot had some feeling for her, something Hastings jokingly mused that the short men always fell for tall and plump ladies.

Murder on the Orient Express (2001 film)

The Countess appeared as a minor character in the 2001 film adaptation of Murder on the Orient Express, though she never appeared in the source material. Here, she runs a bar in Istanbul (reminiscent of The Capture of Cerberus). A murder takes place in her bar and she asks Poirot to come and solve it. She suggests marriage, which Poirot rejects. Subsequently, at the end of the show, she joins Poirot on the train at Belgrade and they finish their journey together. 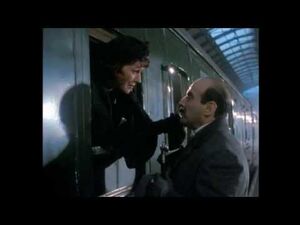 Retrieved from "https://villains.fandom.com/wiki/Countess_Vera_Rosakoff?oldid=4103120"
Community content is available under CC-BY-SA unless otherwise noted.