The Country Road Creature is an internet urban legend that was created by Canadian horror artist Trevor Henderson that is mostly known for its disturbing appearance. As its name implies, the Country Road Creature tends to be spotted in the back country roads, although it can leave if it’s hunting for food and if its prey is extremely hard to find or catch.

The Country Road Creature is shown to be a pale, tall and slim creature with very long claws on its hands. It also seems to be able to bend its neck and arms in impossible positions. The first picture of this creature was released in the woods. A person inside of a vehicle took the picture of the Creature, which was looking at the person while running across a road. Further on, more possible pictures of the Creature started spreading, such as a photo of the Creature climbing on a building, going to the other side. However, it might be just a reference to a classic YouTube video.

The last photo of this Creature shows a pale-white man standing in front of a vehicle, with the man's clawed hand appearing to be the same as the Creature's hand. It therefore implies that the Creature has the ability of shapeshifting into other beings to lure its victims inside the woods in order to turn back into its original form and use its claws to dismember and consume the victims.

What is possibly the Creature's arm stretching down the stairs (note that the caption explains it as a drawing of a dream that a person had). 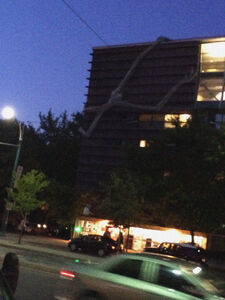 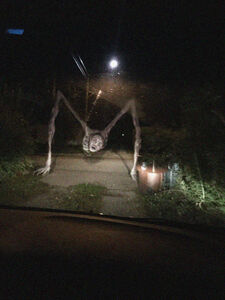 The Creature after having followed someone home.
Add a photo to this gallery

Retrieved from "https://villains.fandom.com/wiki/Country_Road_Creature?oldid=3936361"
Community content is available under CC-BY-SA unless otherwise noted.