The Country Road Creature appears to be a pale, tall, slim creature. Its body appears to be totally bone-slim, while it has very long claws on its hands. It seems to be able to bend its neck and arms in impossible positions. The first picture of this creature was released in the woods. A person inside of a vehicle took the picture of the Creature, which was looking at the person. Further on, more possible pictures of the Creature started spreading, such as a photo of the Creature climbing on a building, going to the other side.

The last photo of this Creature shows a pale-white man standing in front of a vehicle, with the man's hand appearing to be the exact same as the Creature's hand. It therefore implies that the Creature has the ability of shapeshifting into other beings to lure its victims inside the woods in order to turn back into its original form and use its claws to dismember and consume the victims. 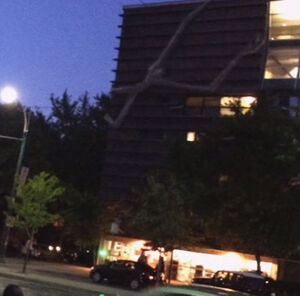 Possible photo of the Creature disguised as a person.

Retrieved from "https://villains.fandom.com/wiki/Country_Road_Creature?oldid=3528449"
Community content is available under CC-BY-SA unless otherwise noted.