Courtney (Japanese: カガリ, Kagari) is one of the Team Magma admins. She is the magma counterpart of Shelly and her male counterpart is Tabitha. She appears in Pokemon Ruby, as well as the Ruby and Sapphire part of the manga series Pokemon Adventures.

In Ruby, Courtney was first fought in the Weather Institute when Team Magma attempted to steal the Pokemon Castform. She was battled again in the Seafloor Cavern. In Emerald, she only makes a brief non-talking cameo appearance alongside Maxie and Tabitha at the Seafloor Cavern after Archie awakens Kyogre.

Courtney, known as Marge in the Chuang Yi translation, is one of the Three Fires—Admins of Team Magma—along with Tabitha and Blaise. Like all of the Three Fires, Courtney has a special lighter that can transmit and record images by burning them on paper. In addition to her lighter, her gloves usually contain mixture of certain Berry juices that carries different properties, including spicy (volume 16), cohesive (volume 18) and corrosive (volume 20). Courtney's specialty is direct Fire-type attacks.

She first appeared trying to steal a sea scanner from an abandoned ship alongside Tabitha. In Loudred & Exploud II, she seen in Rusturf Tunnel looking for the Red Orb, but is defeated by Ruby.

Later, when the Three Fires took off with three Gym Leaders to face off in battle, Courtney's opponent was Roxanne. Roxanne's Nosepass stop Groudon in Lilycove City by use Block. During the battle, Courtney threatened to kill nearby civilians and so Roxanne yielded, allowing Courtney's Ninetales to knock out Nosepass.

She returned in The Final Showdown helping Ruby in defeating Groudon and Kyogre. After being taken to the Cave of Origin by Archie, she was crushed when the cave collapsed. She, along with Steven Stone, and Norman were later revived by Celebi and afterwards she went back to her previous life of competing in Contests and cultivating Berries as she did when she was younger.

A second Courtney was later seen as part of Team Magma (based off the ORAS designs) in the Omega Ruby and Alpha Sapphire chapter. 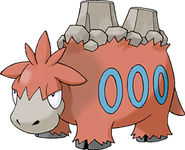 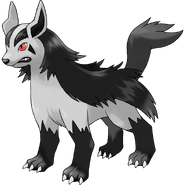 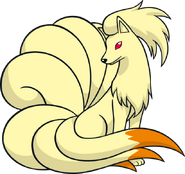 Swellow (Pokémon Adventures)
Add a photo to this gallery

Retrieved from "https://villains.fandom.com/wiki/Courtney_(Pok%C3%A9mon)?oldid=2929847"
Community content is available under CC-BY-SA unless otherwise noted.