Spread two rumors of Hannah's sexual life to save herself (succeeded).

Courtney Crimsen is a major antagonist in the 13 Reasons Why novel, as well as in Season 1 of the Netflix adaptation and a supporting protagonist in Season 2.

In every adaptation, Courtney is a popular student at the fictional Liberty High School. Courtney is a part of Hannah Baker’s Baker's Dozen and is the subject of the fifth tape from Hannah’s list of reasons why she killed herself. Courtney spread two sexual rumors involving Hannah around the school to save her own reputation when a photo of her and Hannah kissing was leaked by Tyler, she says that the photo is of Hannah and an openly gay female student, and she also adds by lying and saying Hannah went down on another boy, this boy had already said Hannah had sex with him so Courtney took advantage of the situation. She is implied to come from well-off parents in the TV Show.

In the novel, she is also an accomplice in Bryce Walker's sexual acts (and implied rape) to a distressed Hannah Baker as she exits the scene, ignoring it, and stays silent about it. In the show, she is aware of Bryce raping two characters but passively shows no empathy for them and is willing to silence them to protect her status.

In season 2, she changes her ways and is officially redeemed.

She is portrayed by Michele Selene Ang in the TV series.

Courtney is a very despicable human being, although she initially appeared to be a sympathetic character and a good friend to Hannah Baker. In the Netflix adaptation, she hangs posters up after Hannah Baker kills herself (whom she claims to be friends with), claiming them to be for suicide awareness to the school and to help the school heal. However, as the story continues her true colors slowly pear through the story.

Underneath these characteristics, Courtney has is uncaring, cruel, arrogant, cowardly, and most of all excessively self-involved, with a complete lack of consideration for others and only looking out for herself. Her main goal is to keep her reputation intact at the expense of anyone else. After a photo of Courtney and Hannah kissing is leaked to the school, Courtney refuses to admit that she is homosexual (for a moderately sympathetic motive), but is willing to ruin other people's lives to keep this secret quiet. Clay exposes that she only does things in school to expand her influence and strengthen her farce of being a sweet girl, but she has proven on every occasion she'll always think of herself when things go sideways. She is also a social bully, she and her friends distance themselves from Hannah at their school dance, she is also shown snickering antagonistically in class at Hannah after her personal poem is read out loud in class, and also with her friend after seeing Hannah work at the movie theater.

In the novel, when Bryce makes moves on Hannah in the infamous hot tub scene, Courtney is present and exists the hot tub leaving Hannah to her fate and stays silent about Bryce's actions. She throws Hannah under the bus (whom she calls a friend), knowing all the pain Hannah has already gone through and her already damaged reputation, to save her own reputation by destroying Hannah's, and shows absolutely no remorse for her actions. She agrees with covering up Bryce's rapes to keep the tapes silenced, showing no concern or sympathy towards Hannah and Jessica for being raped by him. She also doesn't shun Bryce for his crimes, even at one point calling him "an alleged rapist" because of his status on the campus (Despite the fact that Justin Foley - who was present at one of the rapes - confirms that Bryce is a rapist), unlike Tyler who she self-righteously shames for being a stalker since Tyler's crime directly affected her unlike Bryce's.

Courtney deludes herself and calling the dead girl an "unstable, jealous liar." She refuses to accept being responsible for her part in Hannah's pain showing that she is completely arrogant. When Tyler suggests turning in Bryce as a scapegoat for the school, she no doubt considers this, wanting to get out of the situation, despite the fact that she detests Tyler. By the end, Courtney is shown as the sniveling coward she is, who will always put herself ahead of others, though she isn't totally ignorant to other people's pain. She cried tears of guilt when Clay brought her to Hannah's grave, but even so her selfishness prevailed, thus she continues to oppose the truth for her own sake.

In season 2, she is nicer and more likable, once openly showing disgust for Marcus on how he treats girls although she is barely mentioned from this point in the story.

Courtney, sitting down in the same spot in class, tells Hannah she was going to get in trouble. She told Hannah to watch and learn as she laid her head right side down and joins her hand to her head making an example of how Hannah should be sneakily getting some sleep. Courtney tells Hannah that with her schedule, a power nap is an essential thing for her after Hannah asks "You sleep in class?". Hannah tells Courtney she couldn't sleep last night and Courtney asks Hannah, "Obsessing over the History exam?" to which Hannah denies, she then asks further questions, "About who you're gonna take to the Winter Formal?", to which Hannah is surprised people actually take people to the Winter Formal, they are then caught out by their teacher who asks for quiet study. Courtney then asks what else has her up at night. Hannah confesses that there could be a Peeping Tom at her house, outside her window. Jessica shushes them. Courtney talks a little quieter and carries on telling Hannah that nothing that interesting happens to her, Hannah tells Courtney that interesting isn't the first word that should come to mind, Hannah hinting that it's more creepy for her: "It's sort of awful". Courtney tells her she has to do something about it, Hannah asks for ideas, Courtney says she doesn't know but is willing to help. The teacher interrupts them again with a stern warning. Courtney writes something down on paper and shows it to Hannah, it reads "We set a trap!". Hannah quietly laughs, happily.

We see Hannah and Courtney digging through some things. Courtney and Hannah lie to Courtney's Dad when he starts asking questions as he comes in. After her father leaves, Courtney continues rummaging and finds a flashlight telling Hannah it's for blinding bears, giving people time to run away. Courtney asks who Hannah thinks it is, Hannah says it could be a stranger she sees sometimes, walking with an umbrella on sunny days. Courtney shows Hannah how bright the light is, adding she may want to look away.

We see Courtney come to Hannah's house, they sort out a plan, but things get a little out of hand as they drink alcohol and play a game of truth or dare, which ends up with Courtney and Hannah kissing, Hannah hears the clicking of someone taking a photograph and picks up the flashlight, first accidentally flashing it in Courtney's face and then to the window. Hannah realizes it's Tyler and then Courtney becomes suddenly really scared that it's someone from the school and walks out of Hannah's room ashamed and scared that someone knows she's gay that she doesn't trust and is also from their school.

Hannah tries talking to Courtney, who pretends everything's fine and tries to brush off most things, until Tyler texts the photograph to almost over half the school, causing Courtney to push Hannah away and tell her to sternly stay away from her, causing Hannah to cry into her locker at their friendship being over because of Tyler.

Hannah tried to reach out to Courtney, even though Courtney was trying to keep her distance. Eventually, she'd had enough of it approached her at her lunch table carrying her tray, uninvited, in hopes of being friends again. When Courtney's friends arrived, Courtney decided to invite Hannah to go to the school dance with her and her friends, to which Hannah agreed. Courtney was confronted by Montgomery de la Cruz concerning the photo of two "unidentified" girls kissing. Realizing that her reputation was on the line, she spread sexual rumors about Hannah, deepening Hannah's sense of loneliness and depression, thus becoming the fifth reason of why Hannah committed suicide.

Clay, angered by Courtney's actions, makes Courtney drive to the cemetery to see Hannah's grave. He yells at her for being too cowardly to admit she was gay, and for throwing Hannah under the bus. Courtney, only thinking of herself, whines that her personal life made it hard for her to come to terms with her sexual orientation, she then drives away, never officially admitting her homosexuality, ditching Clay at the graveyard.

Throughout the rest of the season, Courtney selfishly attempts to silence Hannah and stop the tapes from being heard, in fear that it would damage her reputation and make her seem guilty for Hannah's suicide. Many of the other people responsible for Hannah's suicide are disgusted by how vulgar Courtney reacts to Jessica and Hannah's rapes, claiming that they are only alleged. Courtney continually cowers and denies what Hannah says throughout the season.

Courtney is redeemed in season 2 and doesn't commit any villainous deeds. She serves as a supporting minor character. She comes out as homosexual and defends Hannah in court, she even admits to spreading the rumor that Hannah was gay to let her take the fall and says she is not proud of it, and later honors Hannah by attending her funeral ceremony.

Her story in the novel is different from the show, but overall she is just as self-serving and callous as she is in the series, however one notable difference appears on the second to last tape. Courtney and Bryce both convince Hannah to join them in Courtney's hot tub at her after-party. Hannah doesn't trust either of them for their personalities, but does so anyway, no longer caring what happens to her. Bryce shows interest in Hannah and starts playing with her bra. Hannah gives no reaction of consent or dissent from Bryce's actions. Bryce then starts sexually touching Hannah and moans "feels good" sexually. Now realizing what Bryce is up to, Courtney exits the tub and walks away, leaving Hannah behind in the hot tub. This is her final appearance in the novel. 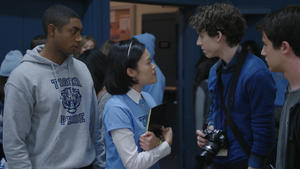 Courtney confronting Tyler in "Tape 4, Side A"

Courtney and Hannah kissing in a flashback in "Two Girls Kissing" 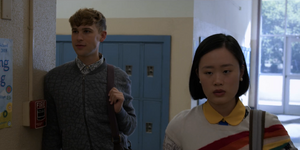 Retrieved from "https://villains.fandom.com/wiki/Courtney_Crimsen?oldid=3290347"
Community content is available under CC-BY-SA unless otherwise noted.