Courtney Rush is a villainous professional wrestler competing on the independent circuit. She has competed in several different promotions, including SHIMMER Women Athletes, Bellatrix Female Warriors, and NCW Femmes Fatales, among others. Courtney has held the SHIMMER Tag Team Championship, the Bellatrix World Championship, and she is a former NCW Femmes Fatales Champion.

Courtney Rush has mostly competed as a babyface, but she has displayed her villainous side on a number of occasions. Courtney captured the Bellatrix World Championship as a babyface at NCW Femmes Fatales XI on March 30, 2013, defeating Allison Danger to win the title. She was scheduled to defend the title against Liberty at the Bellatrix vs SHIMMER event in October of that year, but she suffered a terrible injury and was sidelined for the rest of the year. Courtney did appear at the event and sat at the entrance ramp during Liberty's defense of the RQW European Championship against Sammi Baynz. With the referee down, Courtney entered to make the three-count in Liberty's favor, but at that moment, Courtney turned heel and delivered a sucker punch to Liberty, allowing Sammi to win the title. Courtney's title match against Liberty took place at Bellatrix 8 in March 2, 2014, and she would lose the title to Liberty.

Courtney spent April 4, 2015 turning into a villainess in two different promotions, beginning with her appearance at NCW Femmes Fatales XVII. She was originally set to defend her Femmes Fatales Championship against Saraya Knight in a singles match, but outside circumstances turned it into a three-way dance with LuFisto, who ended up winning the title. After the match ended, Courtney snapped and attacked LuFisto. Courtney took her new evil persona to SHIMMER a week later and began a heel turn at that promotion as well. She formed a tag team with Xandra Bale and won their first match as a team, but they would fail to defeat The Kimber Bombs in the match for the SHIMMER Tag Team Championship. After the match ended, Courtney appeared to be upset at Xandra and blamed the loss on her. After suffering another loss at the hands of Evie and Heidi Lovelace, the evil Courtney viciously attacked Xandra, severing the duo and cementing her heel turn. Courtney went on to defeat Xandra in singles action. 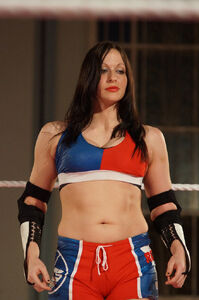 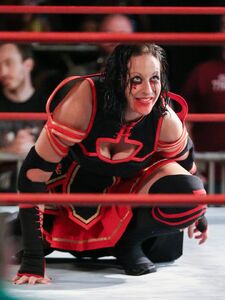