The Covenant Family are the primary antagonists in the 2001 first-person shooter/FPS survival horror videogame Clive Barker's Undying. But Jeremiah Covenant is the acquaintant friend of Patrick Galloway during the story.

The Covenant Family is one of the greatest families having spent with their bonding time in Ireland. This family lasted over nine generations and well known from the past 17th century. The Covenant Family supported many consequences (e.g Ambrose's expelling from the faculty/school) and many tragedies. The heir of the family in began of 20th century was Joseph Covenant, father of the family and the head of the manor; for 1923, the present heir of the manor is Jeremiah Covenant.

Both Joseph and Evaline Covenant had a marriage; Evaline gave birth to several children throughout the generations. They had a good life until Evaline's death while birthing Lizbeth. The first was Jeremiah. Then some time later, twin Covenants Bethany and Aaron were born before Ambrose's. Ambrose, the fourth was born. Evaline gave birth to the fifth child called Lizbeth. After her death, Jeremiah is the eldest child known in the Covenant family, whilst Lizbeth was the youngest. The Curse of the Undying King started by Jeremiah studying his father's magic research book found in the Great Library of the house along with his siblings at the Standing Stones. The wind began to blow violently, and then the ocean starts to boil. Having heard about the strange rumors, Jeremiah read the chants from the book and his sibling falling to the ground to protect each other. The curse influenced the siblings to obey the master's will. Jeremiah Covenant was bent to his will, doing the bidding of the old King while Joseph tried to find his children. After the curse, Jeremiah was horrified about the siblings' misdeeds. They became evil and twisted by their own master. However, the curse only made Jeremiah immortal after being decapitated by his own siblings. Lizbeth bit her own maid; Ambrose was expelled from the faculty due to his wicked acts made by him and is also behind the mutilation of a dog. He joined the band of Trsanti pirates to go on the raid; Aaron and Bethany despises each other. Because of this, Aaron lost his jaw. Bethany buried his jaw in her cottage.

In 1923, World War I veteran Patrick Galloway receives an urgent letter from his friend Jeremiah Covenant. Jeremiah, well aware of Galloway's reputation for dealing with occult matters, is in failing health and raves about a curse that has destroyed his entire family. Galloway travels to the Covenant estate on the coast of Ireland to visit his friend, who relates an outlandish tale of supernatural terrors. Galloway decides to honor his friend's wishes by trying to stop whatever was set in motion long ago at the ancient stones where the ritual was performed. Through the Covenants' journals and Galloway's own memories, the nature of the curse and the creature behind it is revealed: the Undying King, a powerful demonic presence threatening to destroy the reality we inhabit. As Patrick begins to unravel the mysteries of the Covenant Family, including finding himself travelling throughout both time and space, traversing both the ancient past and other dimensions entirely, etc. During his journey to the past, he arrives in a monastery where the only weapon is located that can permanently kill the Covenant siblings called the Scythe of the Celts. However, due to the presence of the Scythe in the monastery, all of the monks have fallen under its influence, turning them from benevolent worshippers of faith into murderous psychopaths. After battling monks Patrick obtains the Scythe of the Celts.

After Patrick Galloway does away all other wicked siblings of Covenant Family with his newfound unholy weapon, he finds himself suddenly returned to the island where it had all begun all those years ago, and finds himself facing an unexpected enemy - Jeremiah Covenant.

Rather than being a passive, remorseful observer of all the tragic events, Jeremiah had in fact been just as corrupted as his demonic siblings, having died and been resurrected during the war, and had just been manipulating his old friend Patrick to eliminate his more powerful siblings. Now that all other are dead, Jeremiah was the only link remaining to the Undying King. Jeremiah would then kill Patrick, and siphon away the power of the Undying King, which would make Jeremiah powerful enough to remake the world as he saw fit. Furious at his friend's treachery, Patrick beheads Jeremiah, but this proves to be a mistake, as with the last Covenant slain, the seal is broken, and the Undying King is released. After a long, difficult battle, Patrick is able to destroy the King, but as he leaves the island in a daze, a man he recognizes (and who he says cannot possibly be there) claims that he isn't done with Patrick yet. A sequel hook is added by a mention that after researching the brotherhood of monks, Patrick learns that they had monasteries at similar sites all over the world, and he realizes that this is just one of many coming trials. 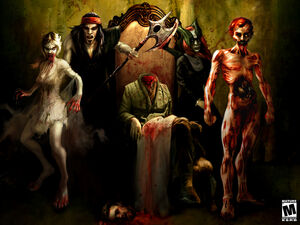 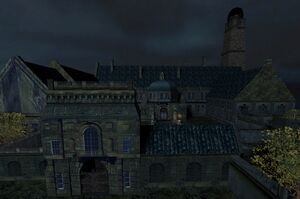 The Covenant Manor, the ancestral home of the Covenant Family.
Add a photo to this gallery
Retrieved from "https://villains.fandom.com/wiki/Covenant_Family?oldid=3326830"
Community content is available under CC-BY-SA unless otherwise noted.