The Crab Beast is one of Professor Dordum's mutated creations. It is an antagonist in Rebooting The Madness.

The Crab Beast was the result of Professor Dordum's experiments on an injured agent. After its creation, it quickly broke free and began rampaging through the facility, eventually coming into contact with Newton Greenshades. However, Newton shot the Crab Beast's eye, temporarily disabling its vision and allowing Greenshades to escape.

The Crab Beast later caught up to Greenshades, breaking through the floor below him and dragging him down. However, Greenshades was able to get away from the beast when an agent attempted to shoot it.

The Crab Beast was brought to an end when Greenshades, mutated by Dordum's serum, stabbed through its skull with his bludgeon.

The Crab Beast was later resurrected by a pair of agents via DNA from Newton's bludgeon. Since Rebooting The Madness 3 has not been released yet we don't know what happened to it afterwards.

The agent who would become the Crab Beast 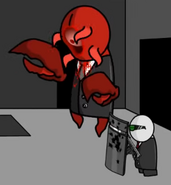 The Crab Beast after breaking out

Retrieved from "https://villains.fandom.com/wiki/Crab_Beast?oldid=3534983"
Community content is available under CC-BY-SA unless otherwise noted.