Crabdozer is a huge, rock-based life form with a crab-like body and a rhino-like face. Crabdozer walks on six crab-like legs and has spikes on her legs. She has a long horn and small ears. Crabdozer has a dark purple/grey color scheme with sunken red eyes.

Crabdozer wears a red spiked collar with the Nemetrix on it. 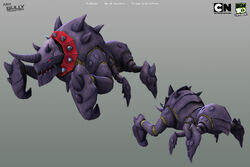 Retrieved from "https://villains.fandom.com/wiki/Crabdozer?oldid=2904328"
Community content is available under CC-BY-SA unless otherwise noted.